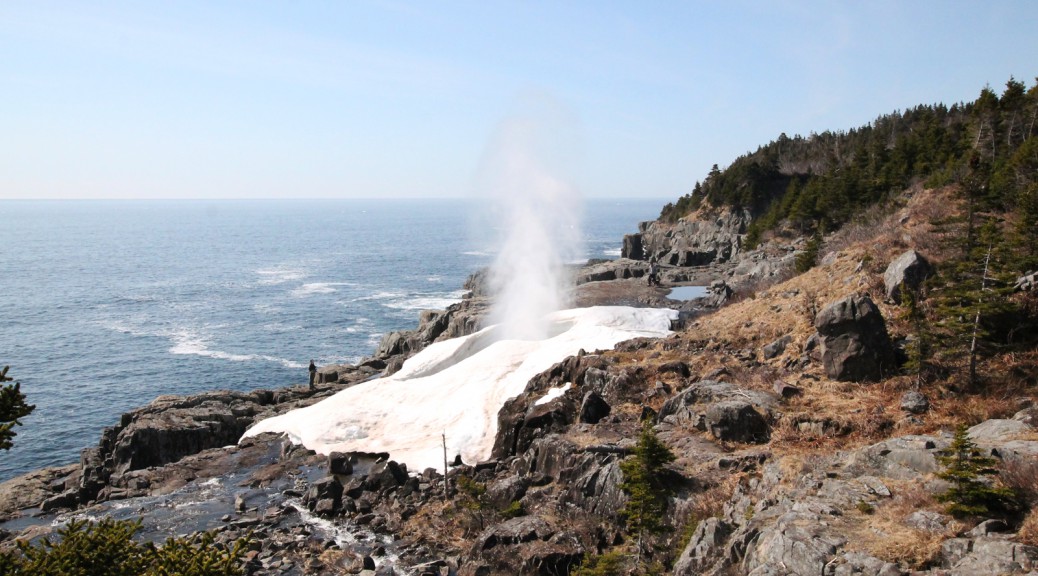 Hi folks! It’s been a long time coming for me, and it was satisfying to finally accomplish: the Spout! Two nice days on the long May 24th weekend presented the perfect opportunity. My plan when approaching the Spout was always to do it as a part of the combined Motion Path and Spout Path hike, approximately 32 kms from Petty Harbour to Bay Bulls: it simply made more sense to me than hiking the 6.5 km in over the Shoal Bay Road. I’m certainly glad that I approached it the way I did, though I’d certainly make changes if I approached the hike again.

The Motion Path is a spectacular one. For folks familiar with the Cape Spear Path and its first barren 5 km or so, the section of Motion Path past Big Hill will feel familiar. The ground is easily traversed and the scenery, the barren land dotted with erratics and small ponds, is pretty spectacular. I took a quick break on the grassy shores of Alexander Pond, a scenic spot. Ascending a little, I was surprised to see snow along a ridgeline, which needed to be crossed at Lower Cove Head. The remaining snow was treacherous at least once: a gully, still filled with snow, but with holes showing undercut at least 5 feet deep, needed to be traversed at one point. I did so cautiously.

A bird of prey circled overhead as I approached the climb to Burkes Head; I recorded some audio of his call and I’ll try to identify him. He continued to circle and call until I had passed Burkes Head. The sun was starting to get low as I headed toward the Tolt, making for a nice picture as I looked back at Hartes Point. I quickly traversed the coastline to the Miner Point campsite, lay my gear down, and started scoping out the site for the ideal tent spot, as I was alone. Well, sort of: beavers have taken up residence at the back end of the site, damming both the river at the edge of the campsite and the one about 150 m to the north of it. I wouldn’t use either for drinking water, even with a filter. And the mosquitos: once I got my filter set up and my meal cooked, I headed into the tent for the night to avoid being carried away by these huge creatures.

I was surprised that, at about 11pm, another set of hikers made their way onto the campsite. They had hiked the last couple of hours in the dark with headlamps: braver souls than me. They told me they had come face to face with a moose in the dark who, when frightened by the hikers, charged past them, missing by a foot or two. Be careful out there folks!

Miner Point was lovely, but as per usual, I was awakened at dawn. A bird of prey was calling from one of the trees close to the camp, and a woodpecker seemed to be pecking a tree directly above my head, so I got up and started to break down camp. The other hikers were just stirring as a strapped on my pack and headed on my way. The campsite is only a couple of kilometers from the Spout trailhead, and I was there quickly, passing the spectacular twin waterfalls at Raymond’s Gulch along the way. Approaching Shoal Bay Road, I explored the remains of structures that are found there, and was surprised to see a Ruffed Grouse standing in the centre of one!

Leaving the Motion Path at the end of Shoal Cove Road, the Spout Path began much like the last ended. The rivers and coastline along this section are beautiful, to be sure, but the highlight is the Spout: the wave-driven geyser that is a highlight of the East Coast Trail. Spotting it in the distance from Long Point, it was a sight to behold. It put some spring in my step and I was at the Spout quickly, having passed an iceberg in Long Point Cove.

I spent a bit of time at the Spout, taking a break and taking it in. It’s an incredible thing. Some hikers who had spent the night at the Little Bald Head campsite were there as well with their dogs. I passed them packing up as I headed on past Little Bald Head. I passed my first hiker of the day going in the other direction at a timely moment: he pointed out to me that, right alongside us, was a view down upon the eagles nesting on the sea stacks at Landing Place. I was blown away. I hiked a ways beyond this, snapped a couple of pics of a spectacular view of these stacks, and packed my camera up for the last time: it was becoming too much of a burden. I’ve been meaning to get a strap along the lines of a Cotton Carrier Strapshot, this will be the excuse that I need. The unfortunate thing about that is that despite it being a great day for pictures, I got very few because I didn’t want to unpack the camera every time I wanted to take a picture.

I found the going for the 4 km or so of the trail between Green Hill and Freshwater fairly difficult. The trail follows the steep coastline, often rising high above it to avoid a gulch, and then dropping back down the other side. On a hot day, with a heavy bag, and with little sleep, I didn’t enjoy this section of the trail as much as I could have. That said, I was stopped for a rest and a drink in the shade at one point on this stretch, and was passed by a fairly large group of hikers heading from the southern trailhead to the northern trailhead for the Motion Path: they were doing the hike I did, but in a single day. They put me to shame!

Freshwater is nice but I was too tired to explore it and powered on. The last few rises lead to Bay Bulls Light; again, I didn’t stop to properly explore, powering on. Passing many hikers on the way in at this point, I was glad to see the trailhead after a struggle on the last couple of kilometers. Frustratingly, these crowds had the road basically blocked with vehicles parked everywhere on the narrow road, and with great difficulty, I managed to get around them.

Some lessons learned for next time: perhaps leaving the longest section for day two wasn’t the wisest idea: had I hiked to Little Bald Head on day one, I think I would have enjoyed day two more. I’m also going through my pack and lightening my load significantly next time around. Finally, sunscreen: I’m as red as a lobster today, which is far more painful than my achy muscles.

All that said, it was an incredible adventure and a huge chunk of the East Coast Trail completed in one fell swoop! Check out the pictures of my adventure below!

This walkway leads past a cabin to the trailhead.

The trailhead with the rocky trail aside it.

The rocky path up over Big Hill.

The view of Maddox Cove from Big Hill.

The view towards Freshwater and the Bight and Motion Head in the distance.

A massive owl pellet, next to my size 12.5 for comparison. It was full of bird bones.

Motion Head in the distance.

There are wet spots, bring your hiking boots!

Passing around cliffs and gulches, the trail can pass close to the edge.

Driftwood, or the remains of a dwelling, at the Bight.

A river near Big Rocks.

The signage for the Bight is next to one of the bog rocks.

The debris from the ocean is found a significant distance from it.

Watch for erosion along the trail between the Bight and Alexander Pond.

Motion Head, easy to miss, especially with the sign down!

The bedrock in places along here is made up of this conglomerate. Makes me wish I knew more about geology.

Atop these hills, much of the landscape is covered by these dense bushes.

Some off the erratics, leaning at impossible angles.

Kettles Cove, with Lower Cove Head in the background.

Behind this erratic, snow is still visible along the protected ridge near Lower Cove Pond.

The climb to Burkes Head was one of the less gentle climbs on the trail.

The climb down the ridge on the other side of Hartes Point.

Looking back at Hartes Point.

Stone steps around another large erratic.

The sewage outfall at the end of Pipeline Road.

Veins of quartz in the rocks near Miner Point.

The Miner Point campsite with plenty of time to spare.

Can’t ask for a nicer spot to spend the night!

My supper for the evening: Backpackers Gourmet Pad Thai. It was surprisingly good and filling!

The mosquitos were as big as hummingbirds!

Sunrise at the Miner Point Campsite.

All packed up and ready to hit the trail at 7am!

Towards Miner Point, where the mine was actually located.

Nippers Cove, a cabin in the background.

A gulch along the final length of the trail.

The twin falls of Raymond’s Gulch.

More structures near Shoal Cove Road. There is a grouse in the center of this picture!

The former site of structures at the end of Shoal Cove Road.

One thought on “Motion + Spout Adventure!”