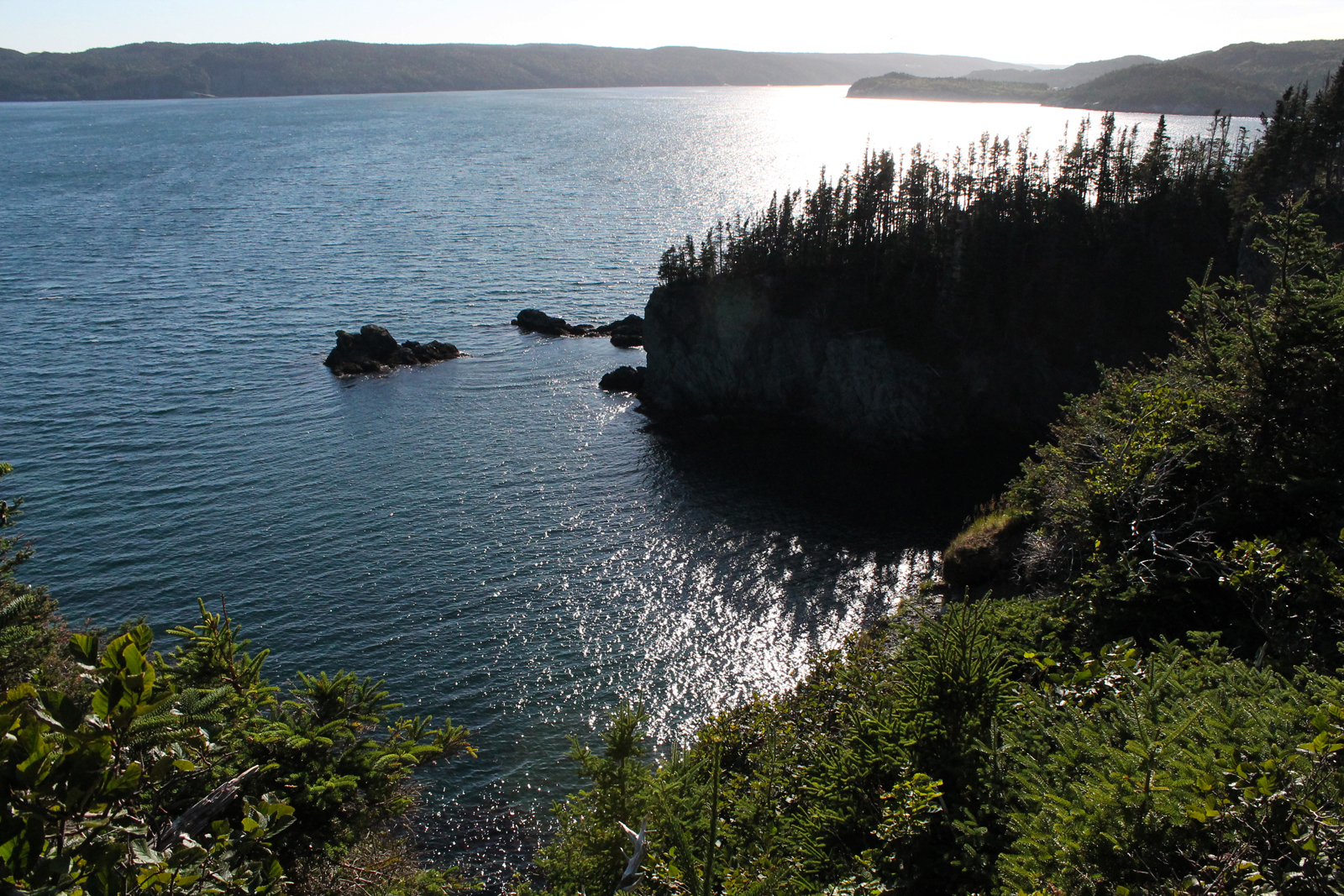 Brigus Head Path is a 6.5 k “moderate” trail with an optional return over land along the old Southern Shore highway, making it an 8 k loop. It’s a highly recommended return trail, easy to find and very short, although hikers should be aware of boggy patches and wet stretches. Heather took her rubber boots and we were both happy with this undeveloped trail.

The trail begins on a cart/ATV path from the wharf on the south end of Brigus South, through tall grass, thistle, berries, and wild roses. The community itself is gorgeous. The trail skirts the scenic beach at Timber Cove where we observed a cormorant hanging out with some gulls, and a bird of prey, possibly a northern harrier, hanging out along the edge of the shore. The cart path continues inland until the trail splits; the path continues on and is the exit point for the Old Southern Shore highway that we follow back.

The trail heads along the shore behind the cover of trees, passing Herring Cove where bald eagles have been sighted, and then up over Herring Cove and along cliff edge. The viewpoint over Hares Ears is spectacular. It continues up over Brigus Head where it meets an overland route. The view of Cape Broyle Head and the cliffs leading to it along the Cape Broyle Head Path are visible from Brigus Head and look to be an incredible hike! Past Deep Cove, a side trail at the complexly-named Tar Cove Point Cove leads to a grassy lookout.

We saw an interesting phenomenon at a river feeding into Point Dennis Cove! Check these pics out:

Those are droplets of water firing straight up in the air! At this point, the trail is about 100 m above the water, so we’re not seeing splashing waves: it was really windy, and it appears that the water running over the rocks was splashing and spraying back up! It looked like a mini Spout! 🙂

Passing a grassy area that was once the settlement known as Bills Tar Cove, a side trail to Tar Cove Beach is a must see and is an easy walk. The trail passes a couple of gulches and passes over a rock shelf before heading inland at Wolf Head, eventually coming to an end in the community of Admirals Cove after following a cart/ATV path that widens into a gravel road.

The return trip begins at a group of houses/cabins where the junction between the trail and the Old Southern Shore highway occurs. Approaching from Admirals Cove, the old road is an uphill trail on the right, with a white cabin at its beginning. I always kick myself for not documenting the beginnings/branches of these access and unofficial trails better… I don’t have a picture of this branch, something that would certainly be helpful to other hikers attempting the loop. At any rate, it is hard to miss, and is an easy walk, not maintained but easily traversed.

Check out the pics below. Click to see them in more detail!

The trail begins as a cart path, passing berries, roses, and more.

Timber Cove and the cliffs beyond.

A cormorant chills on the rocks of Timber Cove with a couple of gulls.

The signage upon entering the vicinity of Timber Cove.

The beach at Timber Cove, an odd structure on one end.

Looking back at Brigus South from Timber Cove.

Looking back towards Timber Cove.

Looking back at Brigus South from over Herring Cove.

The Hares Ears viewpoint is worth checking out.

The view of the cliffs of the Cape Broyle Head trail. Looking forward to this one!

Brigus Head. The trail from the sign is apparently a bird hunting trail, at the end of which one must traverse the cliffs using rope… no thanks!

Many of the coves, like Black Cove, were difficult to capture in picture form because of the tree cover.

The perspective was also hard to capture on film at times: this is the view from the trail, essentially straight down at the water 100 m or so below. You’re looking straight down on those gulls 🙂

Deep Cove from the north side is obscured by trees.

Deep Cove is visible from the south.

Deep Cove, its deep bottom obscured in the shadow of the cliffs we were standing on.

A river crossing in front of the worst case of storm damage I’ve seen on the trails this year.

The rocky end of the Tar Cove Point Cove side trail is worth exploring.

Looks to be the leftovers of a bird kill over the rocky shore of Tar Cove Point Cove.

Tar Cove Point and the rock ledge at the end of the side trail.

The cliffs at the back end of Tar Cove Point Cove.

A viewpoint a few metres away ends at an overgrown cliffside.

There is apparently a memorial at Cross Cove (according to the map) but I can find no info about it.

Point Dennis in the setting sun.

The stone path at the bottom of the wet meadow that was once Bills Tar Cove.

The sign marking the side trail to Tar Cove beach.

Spectacular Tar Cove Beach. We watched a pair of loons dive for food and gannets and terns flying above.

These berries are in a few spots on this trail and everywhere on Flamber Head Path. Anyone know the NL name for them?

These rocks are probably remaining from human activity at Reddys Tar Cove.

A look back at Tar Cove.

Stairs at Shitting Gulch (no joke!)

The trail passes this interesting gulch over exposed bedrock.

A look back at the gulch from the bedrock of the trail.

Heading inland, there are a couple of branches to community trails, such as this one at John Denines Path.

As the trail widens into a gravel road, Admirals Cove is visible at the bottom.

The first portion of the Old Southern Shore highway on the return trip is uphill.