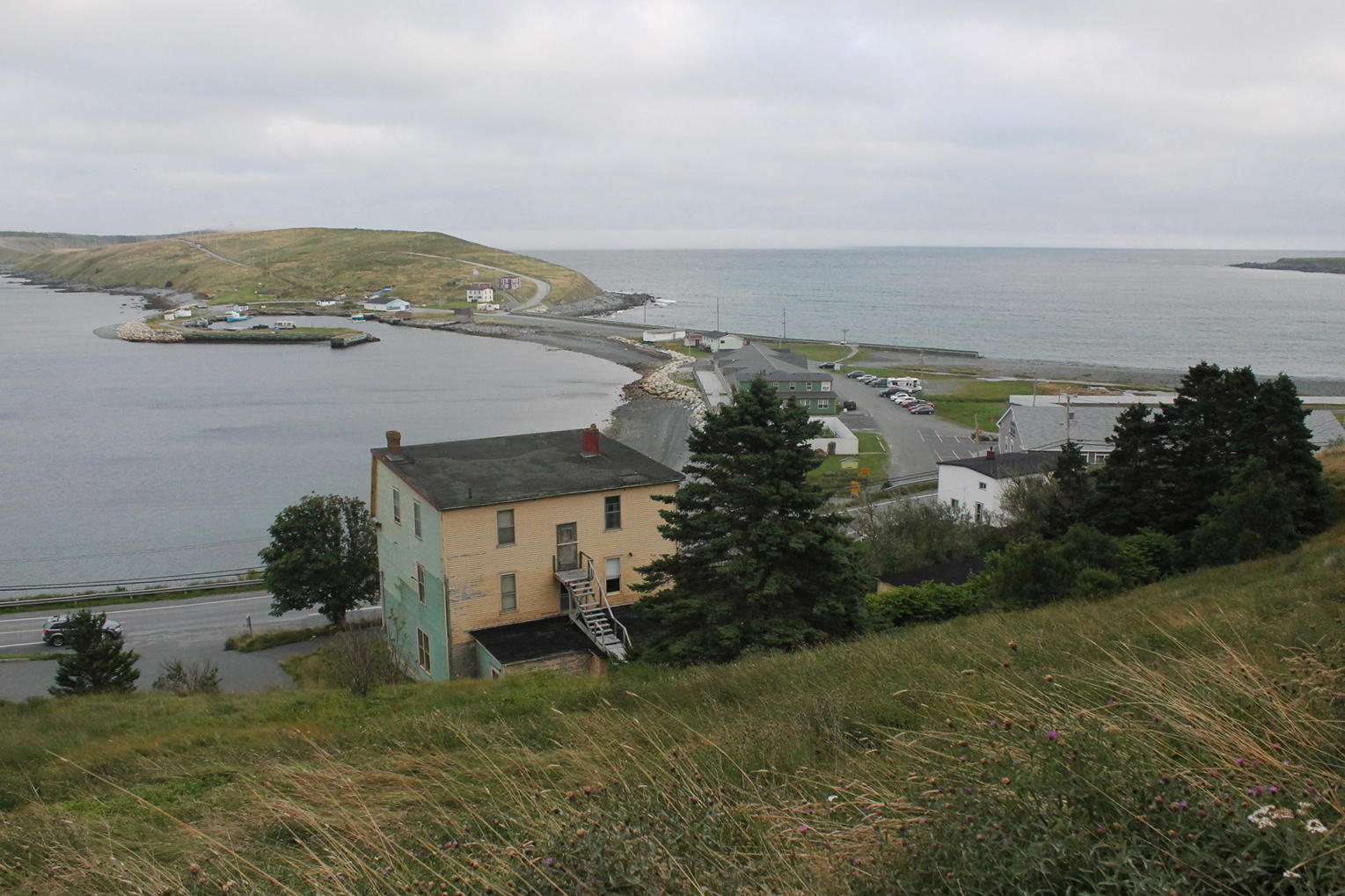 The Caplin Bay Path is significantly different than most of the others on the East Coast Trail based solely on its proximity to towns and roads: it leaves from the side of the Southern Shore Highway as it passes through Calvert, and heads through Ferryland before crossing behind it, with a section along roads in the community. While there is less wilderness on this trail than some others, that didn’t take away from its beauty or from the wildlife we saw: from above the town of Ferryland on the last kilometer of the trail, we watched as hundreds of gannets dove in unison to feed! It was a spectacular sight!

The trail starts in the community of Calvert with a steep downhill descent along a ridge. Nearing the bottom of the descent, a side trail continues to its end in Deep Cove on a beautiful cobblestone beach where we observed gannets, loons, and a kingfisher. From there the trail winds through woods for a couple of kilometers, skirting a couple of gulches and passing a few cliffside views before coming to the back of the Baltimore School. Coming out from behind the chain link fence at the back of the school’s property, hikers should keep left around the school and softball field and watch for signs and trail markers on the trail away from the school through the meadow known as Priests Farm.

From there, the trail enters scenic Ferryland, passing over road until it meets with the old railbed and travels behind the community along that path. There are side trails available, including one over the Gaze which promises an even more spectacular view of the community, but it was unclear which of the side trails heading up the hill went to the Gaze so we decided to stick to the main trail. The trail ends at the trailhead in Ferryland just past the Colony of Avalon buildings. It’s not immediately apparent where the trail leaves the railbed as the exit is not marked: watch for the Colony of Avalon buildings and keep an eye out for the exit at a wide part of the trail just past them. The trail heads down Goosewell Lane, by an old cemetary where most of the grave markers are simple stones, where it terminates.

Check out pictures from our hike below! Click for a better view in the gallery!

The trail descends through thick woods along a ridge.

Deep Cove beach at the bottom of the first hill.

The sign as the trail approaches Deep Cove from the south.

One of a couple of river crossings in the woods section of the trail. We saw a grouse at this one!

Trees had fallen into the end of this gulch.

The trail meets a road and hikers are instructed to stay alongside it.

A smart piece of advertising at the base of a tree!

The trail crosses over a dry river bed.

A beach at what I think is Lance Cove.

The trees were thick and the woods was dark!

Indian pipe growing on the trail.

The view from Gunners Point.

Around a chainlink fence at the Baltimore School.

After passing the school, signage indicates where to go, around the softball field.

The trail marker is near home plate on the 3rd base side.

Heading away from the softball field into Priests Farm.

The trail exits onto a road in Ferryland.

Passing through Ferryland along roads, the trail is well marked.

The beautiful coastline as the trail enters Ferryland.

Heather is greeted by a dog in every community!

The trail continues alongside a road in Ferryland.

The view from the railbed above Ferryland is pretty spectacular.

Goose Island? Shrouded in fog, at any rate.

Ferryland Downs and Ferryland Head from the trail.

A huge flock of gannets, diving in unison!

This widening of the trail is the only indication of where hikers should leave the railbed.

The trailhead in Ferryland!

Goosewell Lane is the route to the railbed.

The cemetary alongside the trail is old and overgrown, with simple stones marking most graves.

One of the few remaining gravestones.

the only wrought-iron fence in the cemetary.

Deep, dark woods on the walk back!

A structure just past Lance Cove.

Boardwalk and lush greenery on the section between Calvert and Ferryland.

The setting sun made for some interesting lighting on the return trip!