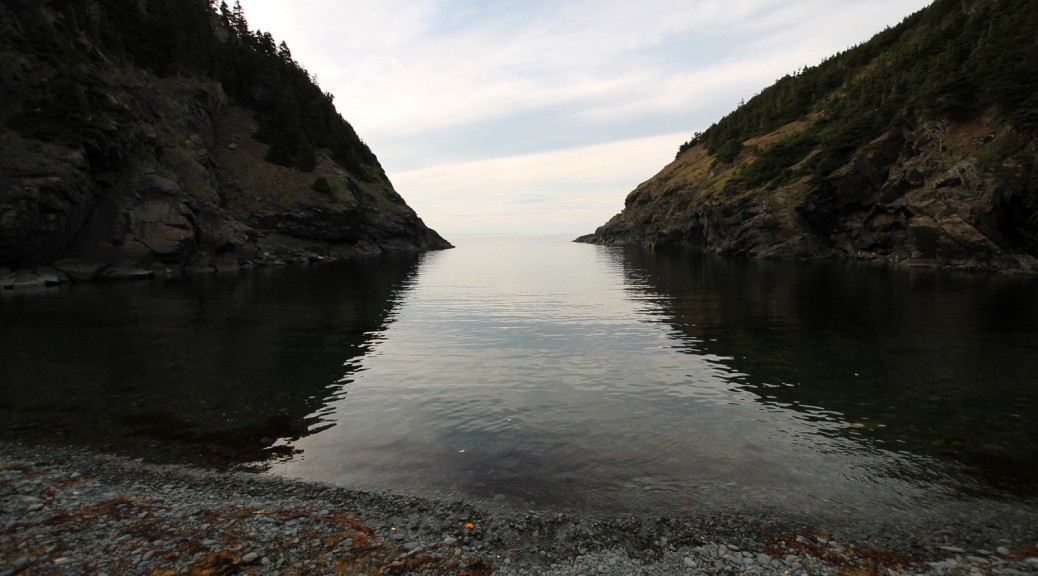 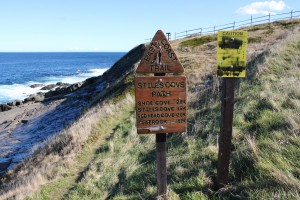 The Stiles Cove Path is actually one of the longer sections on the East Coast Trail at 15.1 km. From the north to south route, hikers park at the church across from the Canada Post office in Pouch Cove. The trail starts crossing fields behind private property, before following the coast away from town and into fields and wooded areas before reaching Hollow Cove, a wide cove so-named because it is undercut (use caution around the edges of any cliffs!).

The trail follows the cliffside through open areas which provide spectacular views before heading back inland and downhill on the approach to Shoe Cove. A number of switchbacks and downhill sections lead hikers to scenic Shoe Cove, a popular destination for families and folks out for a short hike. A bridge crosses the river above Shoe Cove, and the trail continues uphill from this point.

A steep climb leads to open fields and the trail continues uphill until Shoe Cove Island becomes visible, a grassy rock over which waves were crashing the day we hiked to it. The trail winds around the edges of a couple of gulches before it reaches Black Head Cove, an incredible view of which is available from the height of the trail. The trail meets with an ATV trail, which it follows for a short distance, before heading into the woods again. About half a kilometer beyond this is Cammy’s Point, a viewpoint at the 6 km point.

The trail continues around a few gulches including the oddly-named Murdering Gulch before reaching the trail’s namesake at Stiles Cove. A spectacular waterfall is visible at this point, dumping water into the cove.

Red Head Cove at the 12 km point is a huge, high-cliffed cove. The trail is at a high elevation at this point as well, and views of Red Head Cove are spectacular from all sides. From Red Head Cove, the trail passes through some cliffside woods before breaking out of them and passing over barren fields, damaged in spots by ATV traffic. The trail climbs to Red Head, where we watched a pair of Snowy Owls fly back and forth. The trail descends past Red Head, and looking back at Red Head as the trail breaks out of the woods makes for a great view. The trail opens up, providing a beautiful view of Flatrock, before a steep descent, at the bottom of which a side trail leads down over steps to a section of flat rock along the shore. The trail finishes from this point by crossing Big River, passing steps carved into the bedrock, and winding around private property to the end of Hickey’s Lane.

Check out the gallery below for a variety of pics from our various trips over Stiles Cove Path!

The trail passes rocky coastline as it approaches Hollow Cove.

A waterfall makes its way over the edge into Hollow Cove.

The trail marker at Hollow Cove.

Very rough seas as we pass the edge of the gulch!

Entering the woods, we see this thing, solid wire, about a meter in height… anyone?

A last look back at Pouch Cove as we round a gulch.

The first switchback as the trail descends to Stiles Cove.

The view of the river into Shoe Cove from the bridge. It was rough this day!

Past the climb above Shoe Cove, the trail opens up.

The wind whistled up out of this narrow gulch as we walked by.

Blackhead Cove is visible for the first time.

The trailmarker for Blackhead Cove.

The trail opens up onto Black Head North.

Here it meets an ATV trail and heads downhill into the woods.

Heading back down the descent to Shoe Cove.

The trail marker at Shoe Cove.

The fall colors were certainly starting to show!

Rough seas as we enter the fields behind Pouch Cove.

It was very windy!

Hikers are asked to park at the church in Flatrock.

Heather heads to the rocky shore behind the trailhead.

Climbing to Big River, stairs are cut directly into bedrock. Saves on maintenance!

Big River from the bridge.

The side trail just outside of Flatrock is scenic.

The view of Red Head from the south.

A snowy owl on Red Head.

The snowy trail past Red Head.

Red Head Cove from the south.

By the time we returned to Red Head, snow had started so the camera went in the bag.

A closer look at the trail marker at Hollow Cove.

This huge and bizarre tree can be found on the trail to Shoe Cove.

Heather is always greeted by a dog.

The trail marker at Shoe Cove.