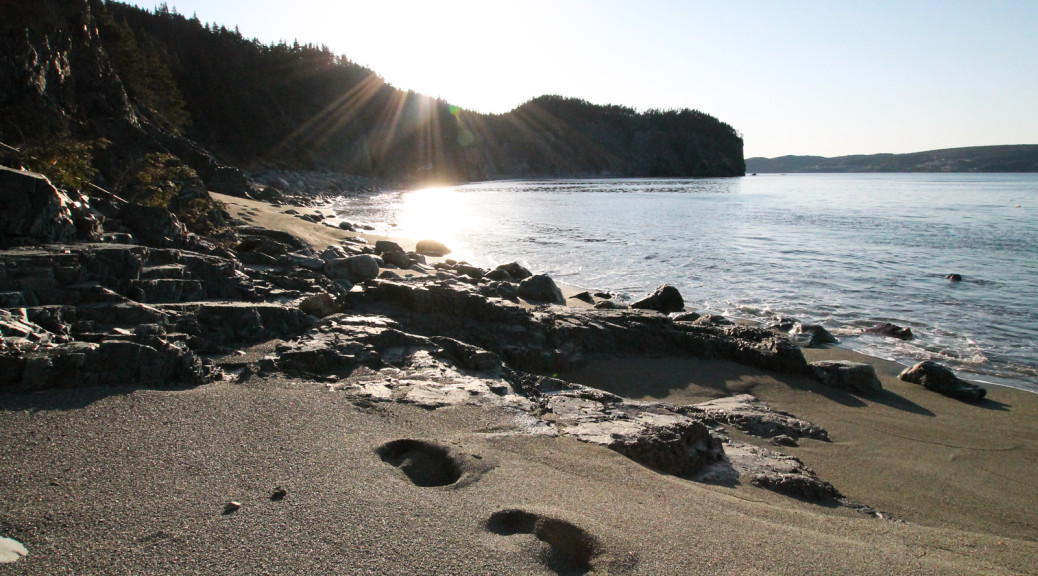 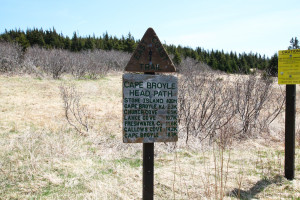 Cape Broyle Head Path is one of the more challenging hikes on the trail, to say the least… but the payoff! After climbing one of the highest altitudes from the North, or pushing your way through overgrown evergreens from the South, right in the centre of the trail you find the spectacular Lance Cove Beach.

Hikers should be aware that as of May 2015, there is no trailhead marking the Northern end of the trail. That said, the ECTA website describes the beginning of the trail well and it’s easy to find. Parking at the Ultramar on route 10, head down South Side Road until you reach the cul-de-sac at the end, and then head down to the beach. Walk it until you see a red, white, and blue rope hanging from a tree: this is your makeshift trailhead marker.

Much of the trail is through forest, and as of May 2015, the 9-10km or so on the Northern end were somewhat overgrown, though blazes clearly marked the trail and it’s certainly passable. The trail begins with a beautiful hike up a hill through a mossy forest scene, and this sets the tone for the rest of the hike: a predominantly forest hike with a number of significant climbs. The early portion consists of a pleasant walk under a canopy of trees. The challenges begin when gulches must be skirted, and climbs around Gallows Cove and Gentleman’s Cove. The map mentions side trails at a couple of points on this stretch but I saw no evidence of them. Perhaps they had become overgrown.

Passing Freshwater River, your water source if staying on the trail, a short climb brings hikers to the Long Will Campsite. This one is unique, with three tent platforms high above Lance Cove Beach on the trail to a viewpoint. There are five tent platforms in total. This is a great base of operations to explore Lance Cove Beach, but bear in mind the trail to the beach is almost a kilometer from the camp. Give yourself plenty of time by aiming to be at camp by supper time.

Lance Cove Beach is a spectacle to behold. A kilometer of “sandy” beach that is clean and peaceful and very isolated. It is certainly the jewel of this stretch of trail.

Past Lance Cove, the trail begins a series of  climbs and descents. The maps indicate a split on the trail at 9.6 km but I saw no evidence of this. The trail widens significantly at this point, however, and rounding Black Gulch and Shag Rocks Cove, some spectacular views are available. Past Church Cove, the trail is carved into the slope of the steep back end of the Cape, and as hikers round the head, the climb begins. Heading up to the Top of the Cape, the trail heads downhill for a bit and then back up to Blow Me Down and Cape Broyle Head. Thankfully, the trail heads downhill from here, approaching Calvert with some quick descents. A side trail close to the trailhead leads to a picnic table and the Fisherman’s Memorial, a plaque and what looks like the remains of a flagpole.

Challenging yet rewarding hiking! Some pictures: