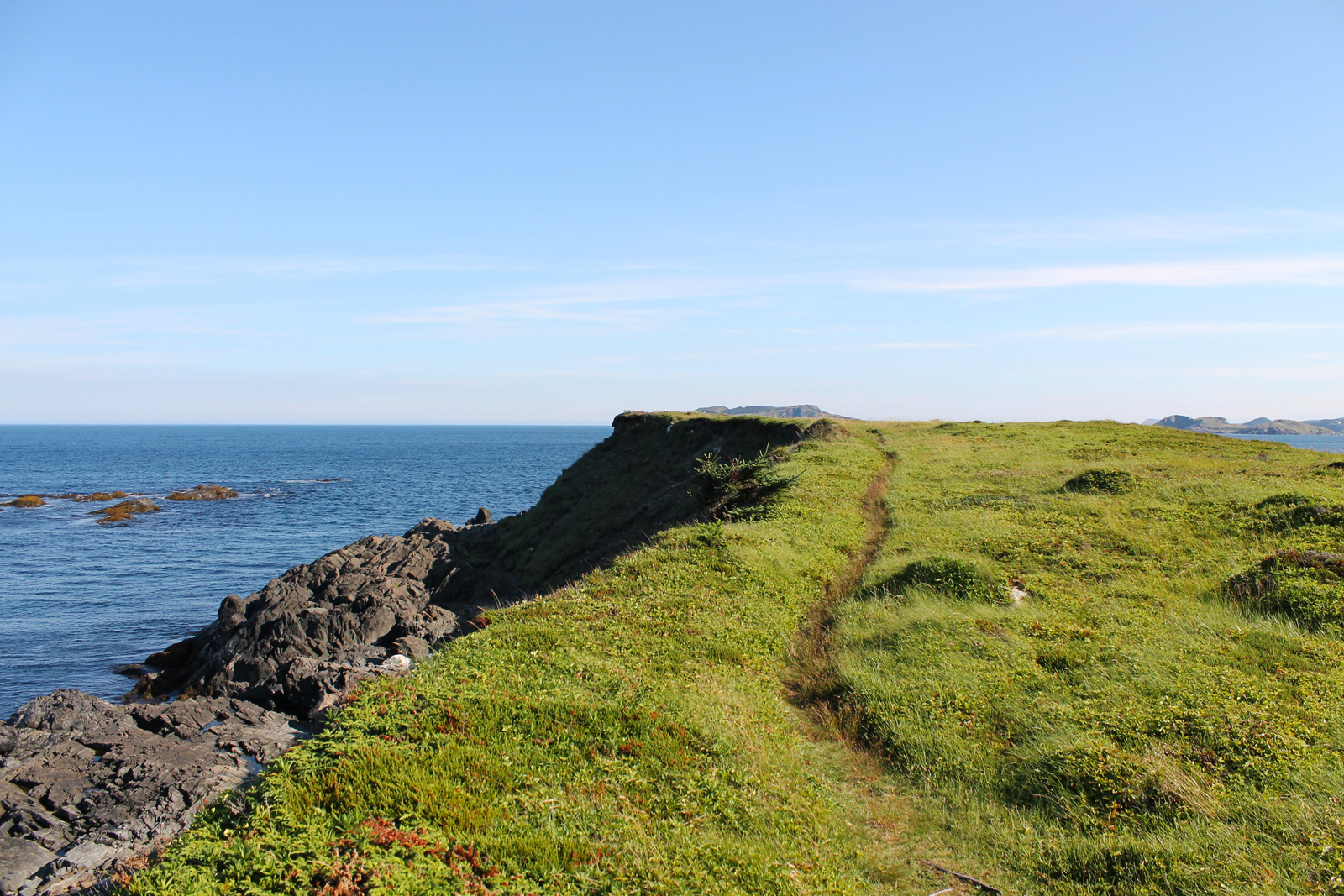 Tinkers Point Path picks up where the Beaches Path leaves off, in Mobile. The trail starts at a turnaround in Mobile just past the High School. We parked in the turnaround; there’s lots of space for hikers to park. The trail begins as a cart/ATV path that goes by a cabin and some private property, and then starts along the rocky coast. Like the Beaches Path, Tinkers Point Path is gentle, with no significant climbs, though there are sections that pass close to cliff edges. Some spectacular views are available at Deep Cove, Cape Canine, and Kearney’s Beach (where a walkway is built out to a viewpoint) on the way to Tinkers Point.

Tinkers Point itself is a grassy point of land where you’ll see some erosion at the rocky point, so be careful. It borders on Vales Meadow, the site of some former settlement, where an old stone well and the remains of two root cellars can be found. Past this, seating is available at scenic Nick’s Cove for a break. Continuing, a beautiful cobblestone beach can be accessed from the trail, which proceeds to Beachy Cove, where the trail passes through a thick section of thistle and over a stone bridge. The signs of settlement are visible as the trail enters the woods near Tors Cove, with rock walls and concrete as the trail makes its way into town via Ambroses Lane. When the trail exits the woods, spectacular Tors Cove is ahead. The trail goes by a couple of beautiful old houses before a side trail heads down to Lower Beach, across from which Fox Island is visible, sheep grazing in the meadow on its side. The main trail continues along a steep grassy bank, over the fish plant, and finally ends at Sacred Heart Church in Tors Cove.

Check out some pictures of the trail below. Click to see the pictures in more detail and to browse the gallery!

After narrowing from the cart path, the trail descends and crosses a river over a stone bridge.

The trail reaches the rocky coast.

The trail follows the coast through patchy woods along a property marked by wooden fence.

The view from the eroding trail above Deep Cove. A more secure loop around Deep Cove is available.

Another view of Deep Cove from the other side.

The sign on the Tors Cove side of Deep Cove.

Cape Canine provides a view back at Deep Cove.

The trail winds through a wet patch approaching Kearney’s Beach.

First view of Kearney’s Beach from the trail.

The trail marker opposite the boardwalk viewpoint at Kearney’s Beach.

The meadow at Tinker’s Point.

Hikers should be careful approaching the erosion at the edge of Tinkers Point.

First time through Vales Meadow, I could only spot the rock piles left as settlers cleared land.

A stone well at Vales Meadow, spotted second time through.

This depression looks to me to be one of the root cellars at Vales Meadow.

This one, close to the trees, looks like the other.

First view of Kearney’s Beach from the trail.

A beautiful view of Nick’s Cove from the Vales Meadow approach.

Nick’s Cove lookout with one of the “seats” in view. 🙂

The trail heads inland and uphill toward Beachy Cove.

Beachy Cove from behind a giant erratic.

A small cobblestone beach just off the trail near Beachy Cove.

Rock bridge crossing a river amongst the thistles at Beachy Cove.

The thistles at Beachy Cove.

Beachy Cove, a scenic spot on the trail!

Rock walls indicate the first signs of settlement as the trail heads inland near Tors Cove.

The trail widens to a laneway as it passes private property upon entering scenic Tors Cove.

“The Cribbies” on the map; a pair of beautiful old houses.

The side trail to Lower Beach.

Heather bravely tackles a section of trail that she would describe as “cliffy” just past the Lower Beach branch.

There is some erosion at the “cliffy” section, to be fair… hikers should exercise care.

And finally, we arrive at the trailhead in Tors Cove!

Greeted by a local.

Lower Beach and Fox Island from the high point of the trail.

The Cribbies as seen from the Lower Beach branch as we head back.