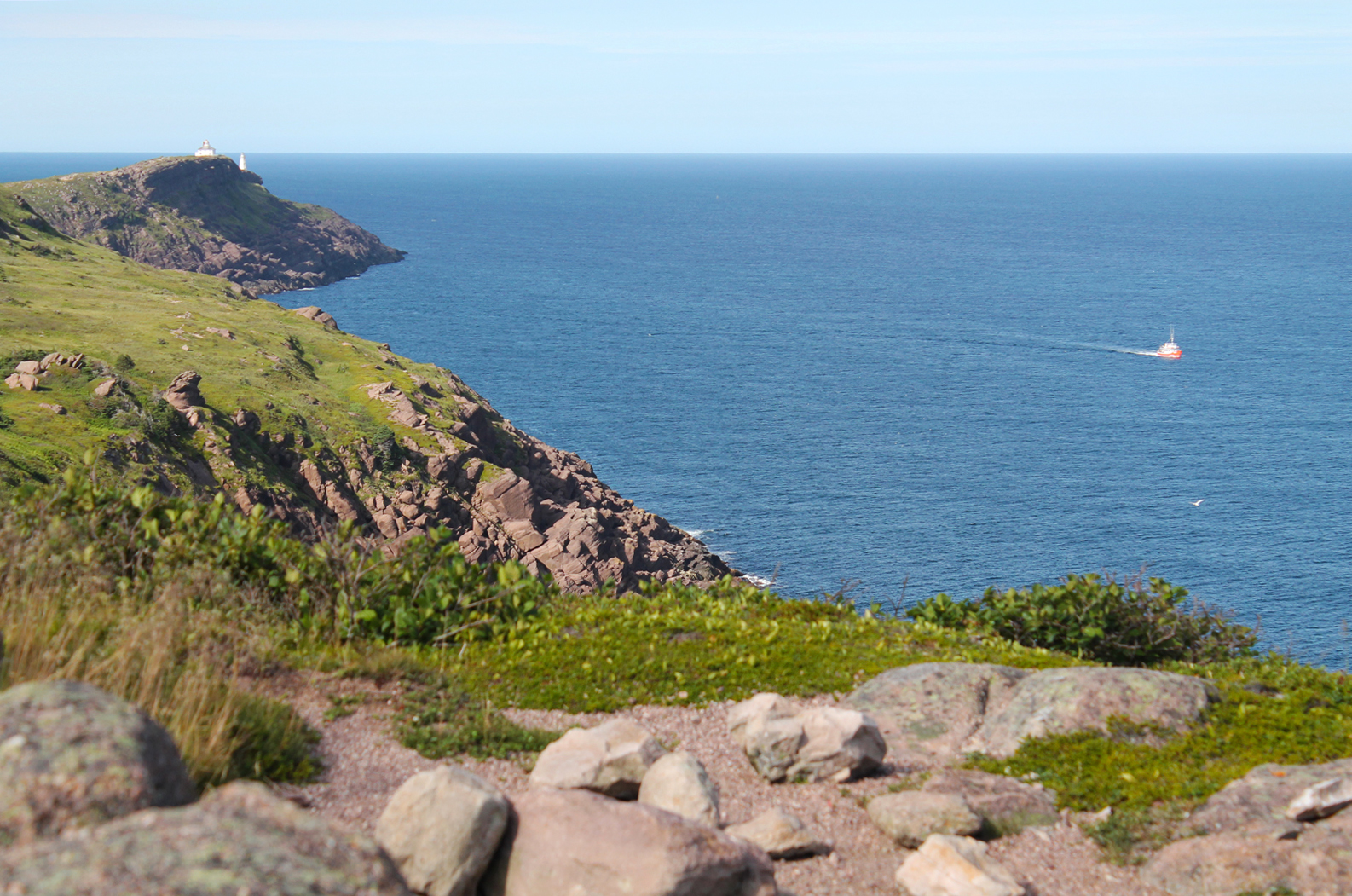 The Cape Spear Path is so named because the trailhead is in Cape Spear National Park, site of the most easterly point in North America, not to mention some beautiful trails, a couple of lighthouses, one of which can be explored, and extensive military bunkers and gun emplacements. It’s a highly recommended site in its own right for visitors. The Cape Spear Path skirts around the bunkers and by the lighthouses and continues on over the barren land beyond towards Maddox Cove.

The trail heads out over barrens dotted with scattered trees and deceptively deep mud pits, as one dog accompanying a fellow hiker discovered! Sticking to the trail whenever boardwalk is present is a good idea. The trail skirts a gulch and we come across the branch to North Head.

Back to the main trail and down over the hill is the site of the former settlement of Staffordside. We couldn’t find any evidence of human occupation, but I’ve seen pictures, so I know some rock piles and walls exist! The trail continues past some severe looking rocky shores and a few tiny coves, through a large field of erratics, before entering the woods at Herring Cove. The “second steps” portion of the trail is interesting; be careful scrabbling over those rocks on a wet day! Some interesting cliffside walks and seabird nesting sites remain before the trail exits into scenic Maddox Cove.

Check out some images from the trail below. Click an image to bring up the gallery!

The portion of the trail from Cape Bay to the Bunker skirts the rocky coastline.

The entrance to the bunker at Cape Spear.

The exit to the bunker and the gun emplacement.

The first lighthouse, automated if I recall correctly.

The older, original lighthouse, restored and open to the public for tours.

The coast laid out before us to be walked, North Head in the distance!

The trail starts through a small patch of woods over some boardwalk.

This mudhole is quite deep, as the white dog in the background can attest 🙂

The trail winds out over windswept barrens.

A view of Cape Spear with a tour boat steaming by.

Tourists aboard this tour boat were treated to a spectacular show put on by a pod of feeding humpbacks who were splashing and slapping the water!

The “Empty Basket”, a beautiful cove.

At the Basket a side trail to North Head begins. We went partway out.

The trail to North Head.

Looking down on Staffordside from the North Head trail, aside a rather large erratic.

The path to the boardwalk which leads to Staffordside, an abandoned settlement.

A pitcher plant in the wetland around Staffordside.

Crossing the river at Staffordside.

These rock paths come in handy when the area is wet.

Dollar Cove, if my map-reading skills are worth anything.

Howlett’s Cove, again, depending on my map reading.

Cronnick’s Cove, same caveat, Apparently fishermen would come into these tiny coves to eat their lunches.

Think this is Killickstone Cove. The easily accessible erratics in the river leading down to this cove were apparently used as anchors.

The remains of an old shack at a rocky river crossing.

Looking out the rocky shore toward Herring Cove.

One of the three large erratics at the Flats.

Hiking over the last of the erratic field.

A nice rock bridge over one of the small rivers along the trail.

Island Cove. The trail passes close to the edge!

The trail leaving Herring Cove passes close to the edge.

The tiny waterfall at the top of Second Stairs.

It’s hard to make out, but yes, this is the trail down over Second Stairs.

I’m thinking this must be First Stairs.

The interesting trail passes close to a gorge.

The first view of Petty Harbour in the distance.

The sun sets on the trail behind us.

A bridge across one of the gulches approaching Maddox Cove.

One final boardwalk on the way into Maddox Cove.

A beautiful sunset over Maddox Cove.

Success! The trailhead in Maddox Cove.

The Cape Spear Path beckons in the distance.

The sun reflecting on the crusty snow was worth seeing.

Massive icicles on the cliffs near the Cape Spear Path trailhead.

The sun is starting to get low over the trailhead as I make my way back.

One of the few exposed boardwalks within view of Cape Spear.

A look back toward Cape Spear from the ridge above Sharks Point. I tried to capture the wind which was a deciding factor in my turning around here instead of at Staffordside.

The best shot I got of the poor snowy owl I frightened, flying over the Cape Spear Path trailhead. I didn’t see him until I was on top of him.

Footsteps leading to the lighthouse.

A not insignificant amount of traffic had made its way to the lighthouse.