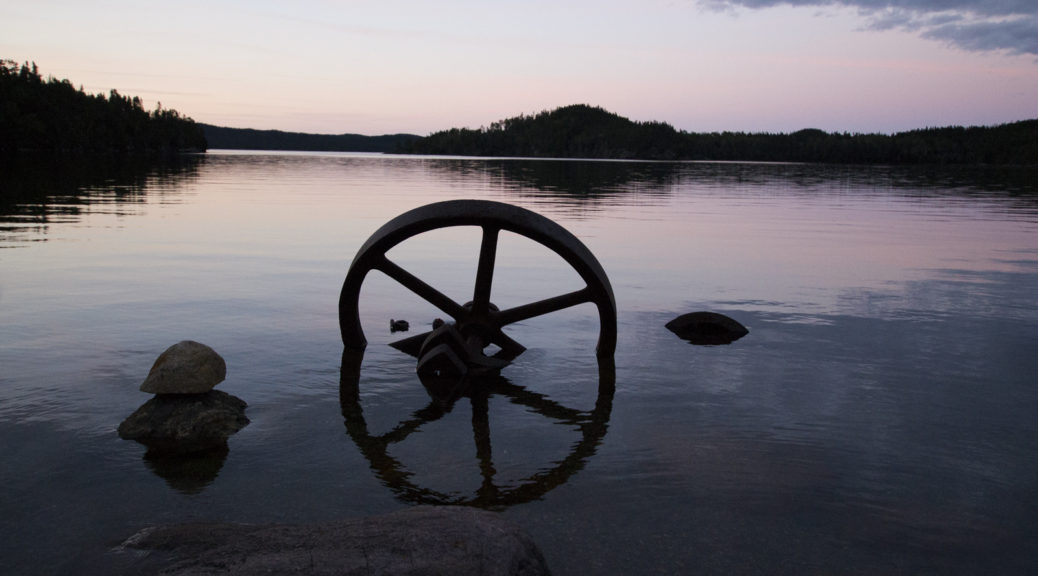 The Outport Trail is an approximately 15 km trail (depending on the map set and starting location, it is given lengths of 14 to 17 km, but from the trailhead and parking area in the campsite loop of Newman Sound, the distance is 15 km to South Broad Cove) in Terra Nova National Park in Eastern Central Newfoundland. The trail is a beautiful woodland trail that breaks out onto the coast for short lengths. It is a nice, wide, well-kept trail, maintained by the wonderful Terra Nova National Park staff to world-class hiking standards. While the trail doesn’t contain technically difficult sections in terms of tough climbing and so on, it can be challenging in places when it crosses wet patches, and the climbs are deceptively tough since they can go on for long distances. With any amount of weight, getting into one of the campsites is a bit of work, but well worth it!

Hikers planning on making the trip to either campground should register in the park, both to reserve a campsite and to get the required backcountry hiking permit. Be aware that there is a fee for both. Once registered, parking is available at the trailhead (parking permit is part of the backcountry permit). The trail starts at the Newman Sound campground, between campsites. It is not clearly marked along the loop road; the best thing to look out for is the sign for the parking area, as it is directly across from the cart path that leads to the trail.

The trail starts with a suspension bridge over a wide river, and then heads into the woods. Passing over branches of the same river a couple of times, the trail passes a patch of wetland and then starts slowly downhill towards the Newman Sound mud flats, a wide stretch of beach covered in seaweed. The trail follows the coastline for a stretch, offering views of the Sound and the bird sanctuary, before heading up and inland towards Mount Stamford, the park’s highest point. At the 11 km point, a side trail to Mount Stamford is available; a 1.5 km trek to the top of the big hill. Beyond this point, the trail heads slowly back downhill towards Hefferns Cove, before a final up and down into Minchin Cove, the first of two maintained campgrounds along the trail.

Minchin Cove is a campground that (at the time of writing) consists of 8 campsites; four near the dock, three at the site of the old mill, and one at Minchin Pond. There is a firepit shared between each of the grouped sites, and no fire pit on Minchin Pond. The site is beautiful and there are a number of Parks Canada informational posts around the campground. The wharf at the campground can be used by hikers who want to travel the trail one-way.

The trail beyond Minchin Cove to South Broad Cove is a little rougher. The trail itself in this section is pretty wet, and care must be taken to avoid these wet patches. More rocks and roots line the trail in this section as well. There are a couple of steep slopes, one coming out of Minchin Cove, the other heading down into South Broad Cove. The campground here consists of a number of small sites spread around the little headland in the middle of the cove, each with a fire pit and picnic table. A lovely little campground.

The trail continues beyond South Broad Cove, but it is unmaintained for the last five years (at the time of writing). It remains unexplored by me.

Check out a few pics of the trail and the scenery below!