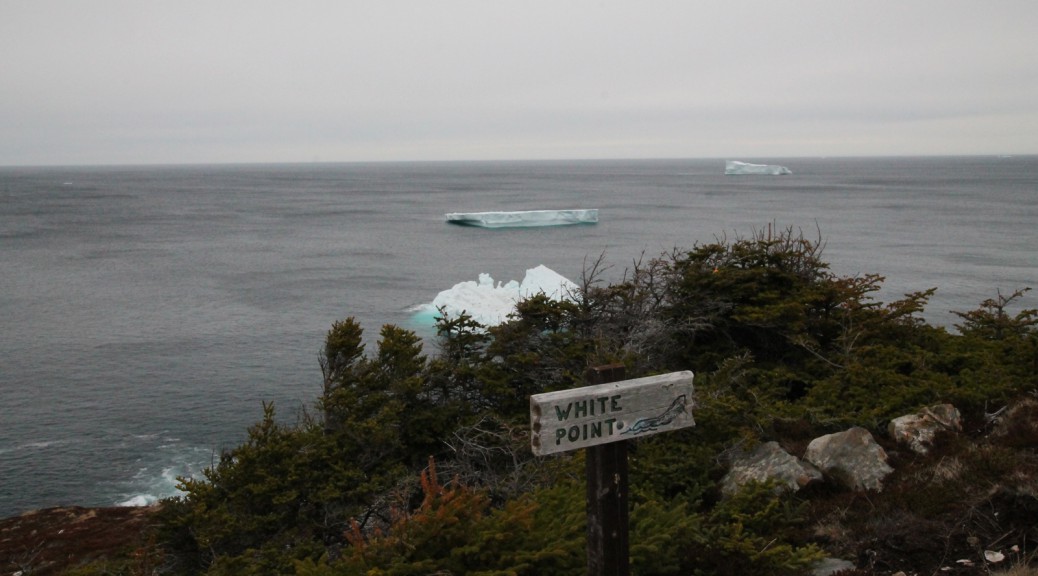 Hi folks, so here’s the second late update. Last weekend Heather and I headed out to the Biscan Cove Path; it had been my goal to get out on this trail early in the season regardless, but the presence of icebergs close to Pouch Cove made it all the more enticing. When we pulled up to the parking lot reserved for hikers, it was obvious that other folks had the same idea: as regulars on this trail, we’re used to seeing two or three cars, but the lot was full!

It was another cloudy, chilly day, but Biscan Cove is a workout with the up and down nature of the trail, so as long as we didn’t slow down at the exposed points on the trail we stayed nice and warm. As the day went on the clouds got more and more ominous, and eventually I put my camera away for fear of being rained on. We got a couple of small showers at the point where we were approaching the trailhead in Cape St. Francis.

We passed a few of the hikers that we knew were on the trail, but it seems like we missed the rush, or that it was ahead of us for the most part, at least. We were a little late starting the trail so I suppose most folks were out on it well before us. We did pass a couple of hikers who had been counting hikers headed in the other direction: the first had a firm number of 43, and the next said they had seen over 50 hikers! That’s simply astronomical for this trail. It had to be the attraction of seeing the icebergs.

Anyhow, without further ado, here are the pics I snapped on the trail. Check out the icebergs, just spectacular!

The first view of the iceberg visible from Pouch Cove along the trail: before any climbs.

A closer look at that first iceberg from Horrid Gulch.

From the hill above Jacobs Cove/White Point, the view of this large, flat iceberg was much better.

This third one comes into view above Jacobs Cove, it’s in rough shape.

A last look back at the bergs from the north side of Big Cove.

Biscan Cove comes into view, and we feel droplets, so the camera goes away!