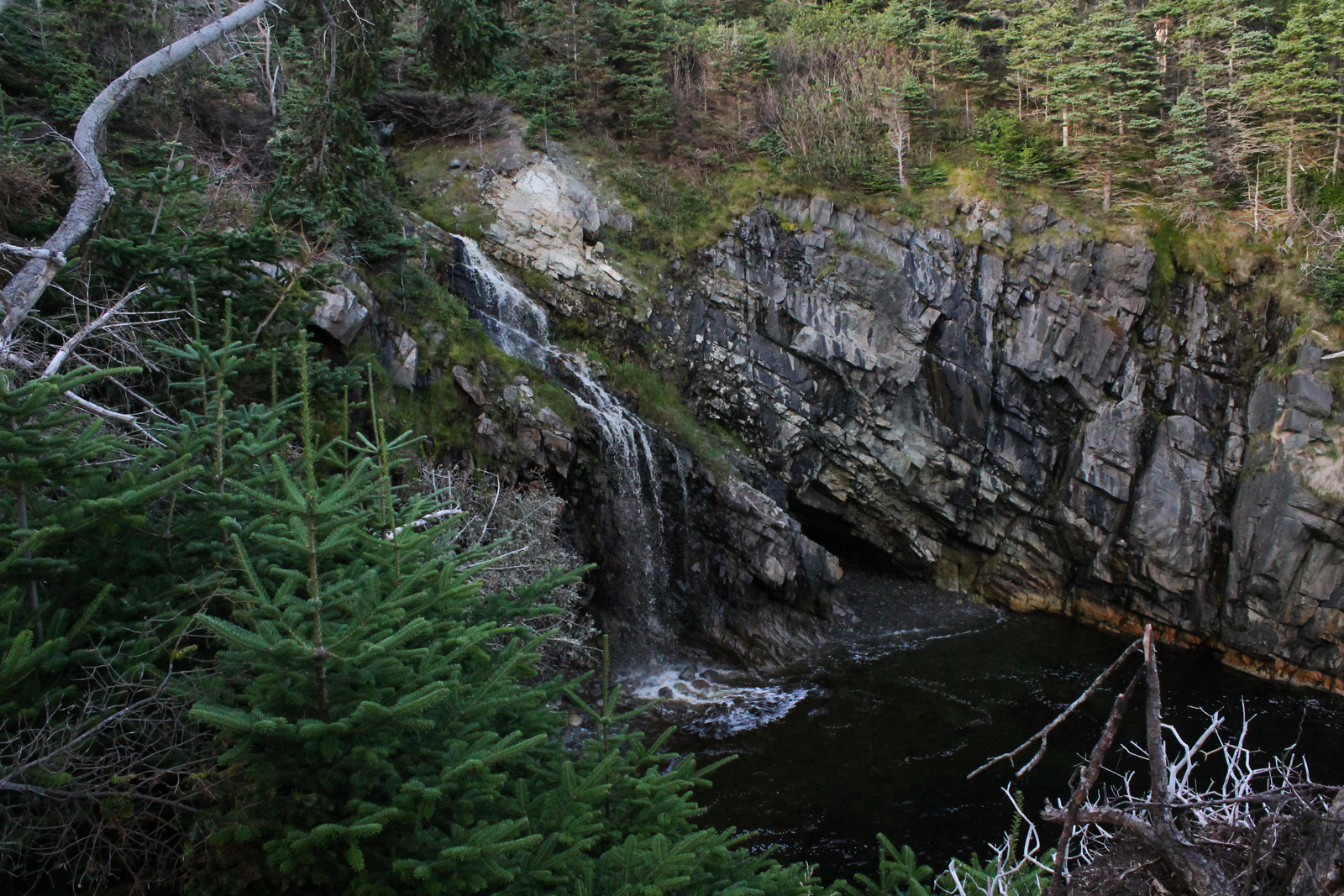 Mickeleen’s Path is a relatively easy 7.3 km hike, with the option to walk it as a loop, taking the Old Track, an older, unmaintained road connecting Witless Bay and Bay Bulls, for a total of 10.6 km. The 7.3 km of the ECT is well-maintained and easy to hike, but hikers should be aware that the Old Track, while wide and even, has many large wet patches that are difficult to avoid, and which will slow you down.

The trail begins after a short walk from the turnaround at the end of Quay’s Road. Turning left towards the shore, the trail crosses planks through massive patches of raspberries, which, when we walked through, were ripe enough to fall off the bushes and were too tempting for Heather. For a couple of kilometers the trail passes through woods with rocky shores and cliffs on the left, until it passes above Island Cove, the site of a nice view as the trail passes through a meadow at the top of the cove. From there, the trail skirts around Big Cove and Chest Cove, where a waterfall is visible from the viewpoint overlooking it. The next viewpoint is at Baboul Rocks, after which the trail passes over meadowland to Southern Head.

Passing Southern Head with a view of the Fiddler, a deep gulch, the red rocks of Lower Red Cove are visible looking back. Passing the sharp rocks of Mutton Cove, a side trail leads to a spectacular waterfall at Otter Cove. After passing through woods and over rivers, the trail comes to a cliff edge where a memorial to William Tobin Jr. is found, who, according to the ECT website, drowned when trying to rescue his dog from one of the gulches. Beyond this point it is a short walk to Horses Back, where cobblestones roar as the waves pass over them, and around Bears Cove, as the trail reaches the edge of Witless Bay. From there it’s a short jaunt through grassy fields and trees to the trailhead.

The path to the Old Track can be found 50 or 100 m down the road on the opposite side, passing new construction on the left and behind established properties on the right, before turning right toward Bay Bulls. At the end of the Old Track, turn off at the meadow and rock pile just before you see houses, otherwise, you’ve gone too far and will be forced to backtrack along roads in Bay Bulls.

Click on pictures in the gallery below to zoom in and examine them in more detail!

The trail begins 280 m from the turnaround.

The trailhead in over the path.

The old trailhead for “Mickeleen’s Walk.”

Heather cleans off some raspberry bushes and moves on. These lush bushes are on both sides of the trail for the first 1km.

The boardwalk is particularly well done on this trail.

The first view of Island Cove.

The trail passes a meadow at the top of Island Cove.

Another view of Island Cove from above.

The trail passes a few babbling brooks via rock bridge.

A waterfall at Chest Cove.

The lookout at Chest Cove Point.

The Baboul (the root of the name Bay Bulls?) Rocks lookout.

Baboul Rocks are apparently spectacular when the sea is choppy.

The meadow on the approach to Southern Head.

Southern Head Cove from above.

South Head, or Southern Head according to the map.

Continuing past Southern Head, the islands of the Witless Bay Ecological Preserve are visible in the distance.

The Fiddler, a deep gulch past Southern Head.

Lower Red Cove, the sight of spectacular red rocks used as a navigation tool by fisherman.

Heather walks out of the dark woods towards Mutton Cove.

Mutton Cove from above.

The trail marker at the Otter Cove viewpoint, the site of an old otter run.

The beautiful falls at Otter Cove.

The marker for the side trail at Otter Cove.

The trail passes over a brook and over rocks.

The site of the memorial for William Tobin, Jr., only 16 years old.

A beautiful memorial for a very sad event.

The rocks at Horses Back were loud as the waves crashed over them!

Houses at Bears Cove have a spectacular view of Witless Bay.

The trail winds through meadow in Witless Bay.,

The trailhead in Witless Bay.

Heading back along the old track, essentially a cart/ATV path at this point.

No matter what old road you’re on in NL, you’ll unfortunately find one or two of these.

A rock pile at the access trail back to the trailhead at the end of Quay’s Road.