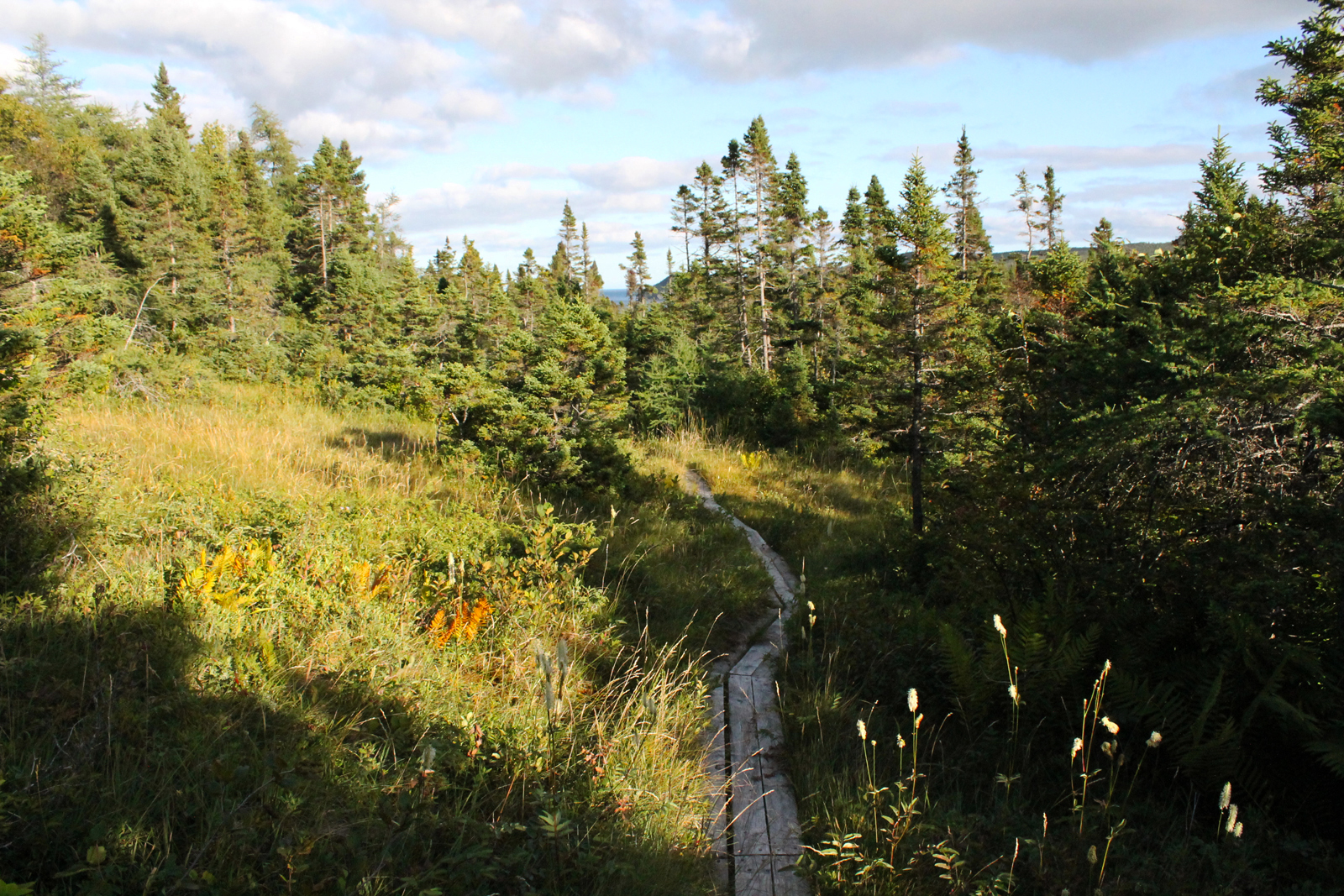 The Sounding Hills Path is one of the southernmost of the Southern Shore hikes. Make sure you’ve got your boots if trail conditions are wet!

The trail starts at the end of an unnamed “paved lane” (the truth is that I didn’t get the name and that’s how it’s described on the map) about a kilometer from the Colony of Avalon Interpretation Center, where hikers are asked to park. The road in isn’t particularly scenic, but there are goats in a field, and at the trail head, a pretty riverhead and beach. A memorial has been placed at the trailhead as well.

The trail starts across planks, through thick brush, along a rocky coastline. In the distance to the left, the Ferryland Downs are visible. A couple of hundred meters in, the trail comes to the edge of a short cliff overlooking Crow Island, after which the trail heads inland through some woods. At Seals Cove, a “side trail” leads down to the rocky shore… I wanted to check it out but Heather, acting as safety director, called it off. You’ll see in the pictures below why she discouraged me.

Through fields filled with reeds topped with cottony flowers, the trail winds in and out along the coast, passing a couple of viewpoints worth checking out including one at Herring Point. At one point about 3 km in, the trail opens onto a wide, grassy ledge that’d be a great place to set up camp or to stop for a picnic. From there the trail climbs inland, providing a spectacular view of Aquaforte Harbour from atop the hill, where we stopped and ate a lot of blueberries.

Crossing over some loose stones, always a favorite of Heather’s, the trail passes alongside a beach at Fairmouth Cove. The map says a trail was being cut to the beach at the time of writing (2002), but I couldn’t find the trail (2014). A couple of scenic river crossings above Fairmouth Cove and a trail built into the hillside follow, after which the trail climbs uphill and passes close to the Southern Shore Highway, a point marked by a bridge. Winding through woods and wetlands across planks, the trail heads downhill to Spout River, where it continues alongside of it for 500 m until it meets the road.

Check out the pictures of our Sounding Hills Path experience below! Click on them for more detail!

A (semipalmated plover perhaps?) at the trailhead. I’ll narrow that down once I confer with Heather 🙂

A cormorant floated and dove in the cove at the trailhead.

A pretty river empties into the cove at the trailhead.

The cove at the trailhead.

A memorial to Ambrose Jordan Jr. at the trailhead.

The view of Ferryland Downs from the rocky coast opposite it.

The first viewpoint is at Crow Island.

The side trail at Herring Cove Island. Looks safe! 🙂

A field of cotton balls!

The viewpoints offer a view of the rocky coast in both directions.

Grassy viewpoints appear in a number of places along the rocky coast.

The trail opens up to this large meadow.

A steep climb is rewarded with a spectacular view.

Heather is always impressed when the trail passes over loose rock.

The beach at Fairmouth Cove.

One of the rivers (Stony River?) emptying into Fairmouth Cove.

The trail is constructed into some steep hills at points.

The marking as the trail passes over the beach at Fairmouth Cove.

The trail passes close to the road as it bridges a riverbed.

The wetlands are lit beautifully as the sun begins to set.

Spout River, which ended up our final destination.

The beautiful sunset as we left the trail.