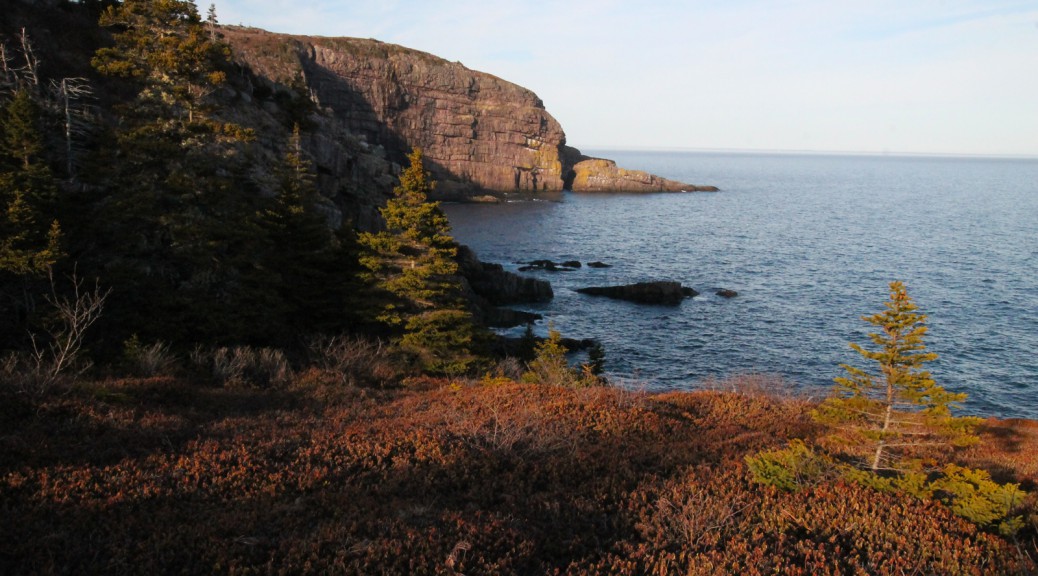 Motion Path is a challenging and rewarding path right in the center of the East Coast Trail. Coming out of Petty Harbour from the north, the trail is slightly over 13 km, terminating at the trailhead for the Spout Path, another key trail in the system. Given that access to the southern trailhead is via a 6.5 km woods road to the Goulds, I decided, like many hikers, to combine the Motion Path and Spout Path into one long hiking adventure. Check out the Spout Path page for more!

The trail starts in the beautiful community of Petty Harbour, tucked into a bay, surrounded by high hills. The first 750 m or so of the trail is a climb up over one of those hills: starting aside a cabin at the edge of town, the trail climbs the steep, rocky hill, aptly named Big Hill, at the crest of which a beautiful view of Maddox Cove and the rest of Motion Bay. Climbing down the other side of Big Hill, the trail passes mainly over shrub-covered barrens, much like the first half of the Cape Spear Path. These barrens are dotted with erratics and small ponds: in places, the erratics are massive, such as the again aptly named Big Rocks.

After passing cliffs at Siles Cove, the trail stays low, following the coastline, toward Motion Head, which, as the map indicates, is easy to miss. In The Bight, near Big Rocks, there is a large amount of wood: not sure if it’s driftwood or the remains of a shack, as a resident is referred to on the ECTA map. Watch for an eroded section of trail just past The Bight. I took a break at scenic Alexander Pond, had a snack on its grassy shores, and then headed on. Rounding Motion Head (the missing sign didn’t make it harder to miss), the trail continues past massive erratics before climbing slightly to pass over Kettle Cove near Lower Cove Head. Another climb brings hikers to the top of Burkes Head and then to Hartes Point Ridge where spectacular views both north and south are available.

Past Hartes Point, the trail follows a ridgeline back and forth as it descends, climbing down to Hartes Point Cove and around the Tolt to Pipeline Road, the location of a sewage outfall from the Goulds. the trail is clearly indicated where this ATV path meets it. The trail follows the rocky coastline from here to the Miner Point campsite, where I overnighted. Hikers should be aware that beavers have taken up residence in the river at the back of the site (May 2014); the two rivers close to the site should be considered contaminated based on this and should not be used for drinking water!

From Miner Point, the trail continues along the rocky shore, passing a cabin at Nippers Cove and heading inland along an ATV path. A sharp left turn takes hikers off the ATV path which would take hikers out to Shoal Bay Road. Rounding a gulch, the trail opens up and passes along the shelf-like rocks of the coast, before heading around Raymond Gulch, where twin waterfalls roar.

Check out some pictures of the Path below!

This walkway leads past a cabin to the trailhead.

The trailhead with the rocky trail aside it.

The rocky path up over Big Hill.

The view of Maddox Cove from Big Hill.

Pitcher plants can be found at various points along the trail.

The view towards Freshwater and the Bight and Motion Head in the distance.

Much of the trail is easily hiked barrens.

The trail passes many erratic fields.

Motion Head in the distance.

There are wet spots, bring your hiking boots!

Passing around cliffs and gulches, the trail can pass close to the edge.

Heading towards The Bight.

Driftwood, or the remains of a dwelling, at the Bight.

A river near Big Rocks.

The signage for the Bight is next to one of the bog rocks.

Watch for erosion along the trail between the Bight and Alexander Pond.

Motion Head, easy to miss, especially with the sign down!

The bedrock in places along here is made up of this conglomerate. Makes me wish I knew more about geology.

The trail passes many massive erratics.

Some off the erratics, leaning at impossible angles.

A large iceberg below the trail at Pigeon Gulch.

Atop these hills, much of the landscape is covered by these dense bushes.

Kettles Cove, with Lower Cove Head in the background.

Behind this erratic, snow is still visible along the protected ridge near Lower Cove Pond.

The climb to Burkes Head was one of the less gentle climbs on the trail.

The climb down the ridge on the other side of Hartes Point.

Looking back at Hartes Point.

Stone steps around another large erratic.

The sewage outfall at the end of Pipeline Road.

The trail marker at the end of Pipeline Road.

Veins of quartz in the rocks near Miner Point.

The Miner Point campsite with plenty of time to spare.

Can’t ask for a nicer spot to spend the night!

Sunrise at the Miner Point Campsite.

All packed up and ready to hit the trail at 7am!

Towards Miner Point, where the mine was actually located.

Nippers Cove, a cabin in the background.

The ATV path from Nippers Cove.

The sharp turn towards the coast is indicated by sign.

A gulch along the final length of the trail.

The twin falls of Raymond’s Gulch.

The former site of structures at the end of Shoal Cove Road.

More structures near Shoal Cove Road. There is a grouse in the center of this picture!