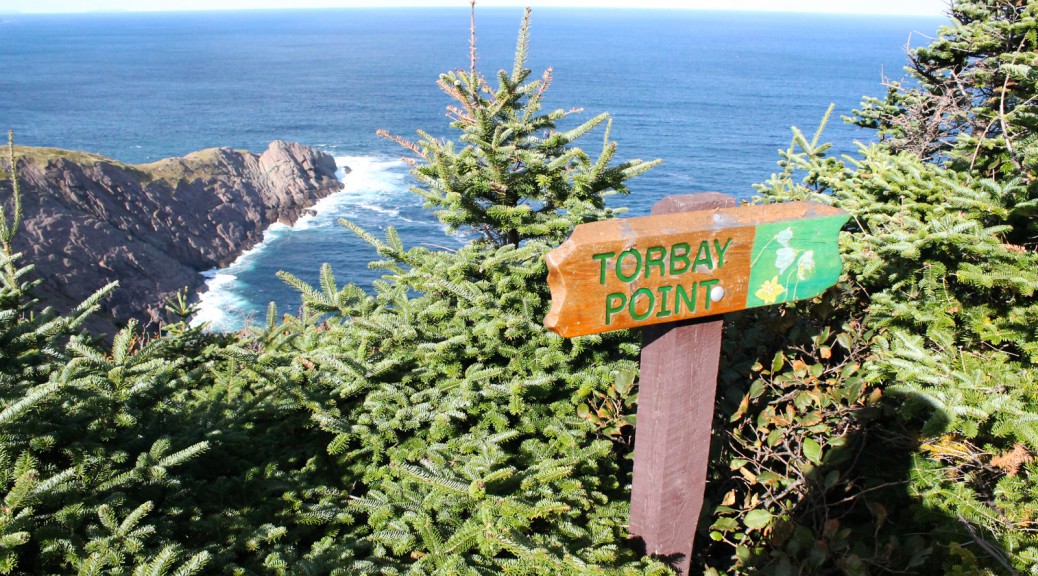 Cobbler Path is a popular trail just outside of the city limits of St. John’s. The trailhead can be found at the end of a quiet road with a nice view; hikers park in the turnaround or along the side of the road. The first 500 m of the trail passes over boardwalk through marsh and woods, after which the trail opens up and a side trail to spectacular Torbay Point is available on the left. This is a highly recommended detour, especially early in the summer when whales are visible on all sides. Be careful on the hike to the end of the point as it is in essence a high cliff.

The trail leaves the point with a steep climb, at the top of which a great view of the Point is available, and again, some spectacular whale watching when in season. The path follows the cliff edge for another kilometer or so, eventually heading back downhill in a gradual descent, passing through forest, to Cobbler’s Brook. A scenic rock bridge at Cobbler’s Brook leads to a view of the Cobbler, a rocky, according to the ECT maps, which looks like a cobbler’s bench. From here, the trail again ascends steeply, climbing to Redcliff Head.

At Redcliff Head, a number of structures are present, all colored from head to toe by graffiti. As I’ve said in the past, I appreciate graffiti art, I’d go so far as to say I’m a fan, but it’s just not appropriate to tag historical properties. There are plenty of overpasses and walls to improve elsewhere.

The trail continues a short way through woods to a junction with Red Cliff Road and another structure and set of towers. From here, hikers can travel a final 0.75 km to the trail’s end, blocked by private property owners. It’s a shame that it has come to this, but I can respect property rights. Unfortunately, this close to St. John’s, there will be users of the trail who aren’t subscribers to “leave no trace”: the folks doing the graffiti are certainly not typical of ECT users.

Check out the gallery below: currently missing some Torbay Point pictures, to be added to as time goes on!

Early in the summer, we spotted many, many whales from the top of the hill just beyond Torbay Point; we were even lucky enough to see a few breaches!

Hikers about halfway out Torbay Point.

At the top of the first climb just beyond Torbay Point.

The view of Torbay Point from well above it.

After a downhill stretch, the trail crosses Cobbler Brook.

Cobbler Brook as it empties into the ocean, an easy rocky crossing.

The Cobbler: I’m never sure exactly which rock bears this name 🙂

The ocean was HUGE this trip out. It was very windy.

Coming up out of the valley where the Cobbler is found, you can see the rough seas.

The entry to the sunken gun battery at the summit of Redcliff Head. “Juvenile recreation” (I love that descriptor for vandalism used on the ECT maps) visible inside.

The gun battery had a great view of the surrounding ocean.

I actually do like graffiti art, but there’s a time and a place, and historical buildings aren’t really it.

The inside of the ruined building at the first gun battery site.

Leaving the Redcliff Head site, we’re at a high elevation.

Nearing the end of the open trail, Memorial University of Newfoundland’s Marine Lab is visible, as is “the castle”… not trying to look in anyone’s windows or anything, but it’s hard not to get it in this shot!

A close-up of the Marine Lab.

The end of the line. I guess this guy has the unfortunate circumstance of living on one of the only trails frequented by hooligans who like to deface buildings. I feel for the guy, but it’s a shame that those folks ruin it for those of us who believe in leaving no trace.

One thought on “Cobbler Path”