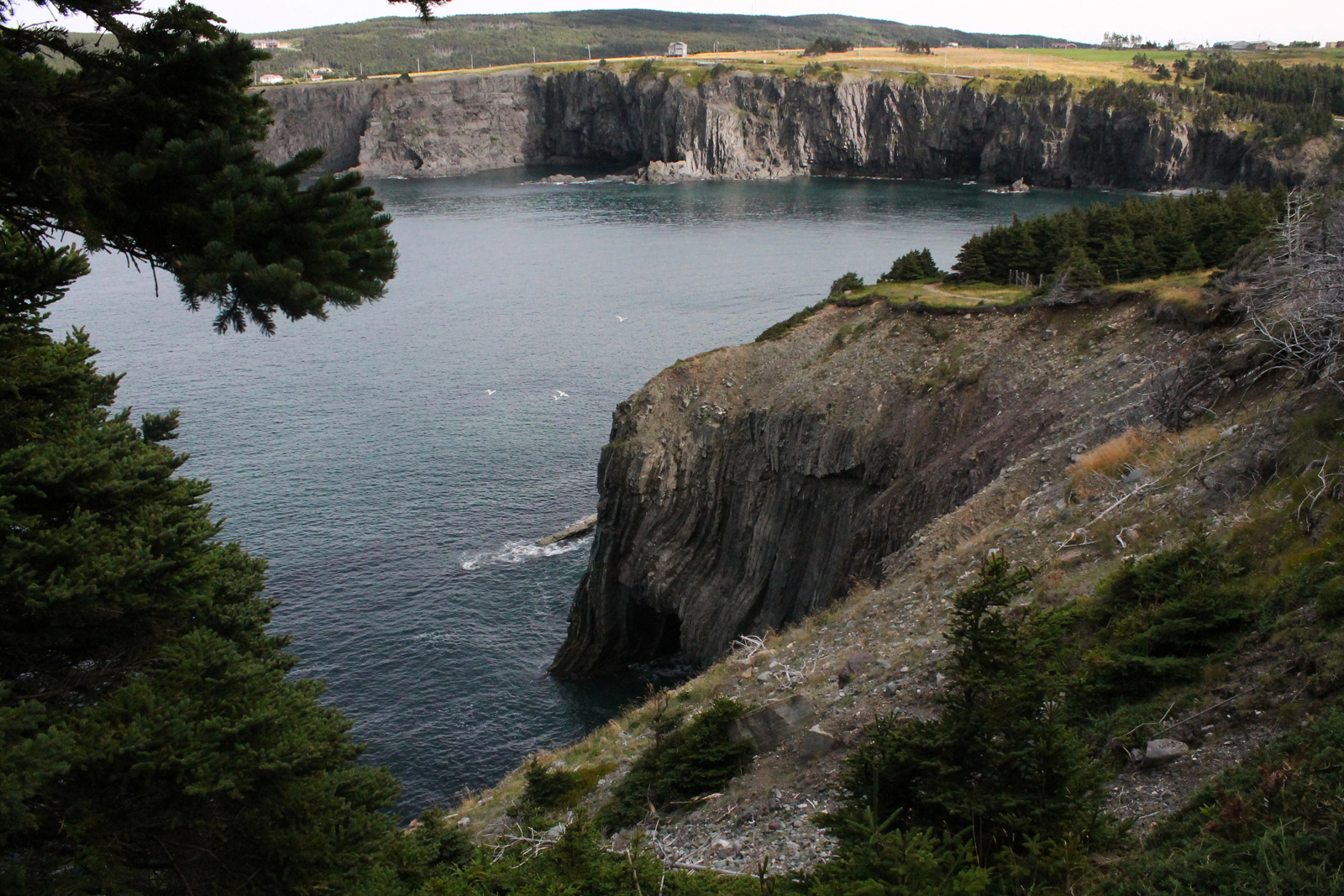 Silver Mine Head Path is a short but spectacular trail found in the newer section of the East Coast Trail, north of St. John’s. An unimproved section of the trail from Motion River to the Motion Drive trailhead includes a river crossing at Motion River that was difficult when we last attempted it (2014). Hikers shouldn’t avoid this northern section altogether, however, as the views from the cliffs beyond this point are impressive.

Picking up the trail at Middle Cove Beach, a very popular destination for folks in and around St. John’s, we headed up over the rocks at the back of the beach and through a short stretch of meadow to stairs heading up to the cliffside. From there, the trail follows the cliffs for about 1.3 km, offering a series of spectacular views, including a sea cave at 700 m, The trail splits and rejoins itself for 300 m, allowing the more nervous hiker the chance to avoid views from heights. The trail then descends to Houlihans River at the site of the former Silver Mine, of which I could find no trace. Private property owners in the meadow above Houlihans River have a spectacular view, and a bench is available here for a rest. The rocky shore is accessible at this low point as well. Beyond this, the trail passes a concrete structure and through some wet woods before reaching Motion River from the other side. Climbing down to the beach and back up the other side would perhaps make the crossing easier.

Click on the pictures below to zoom in and check them out in more detail!

The trail starts with some spectacular cliffs.

A meadow behind private property on Motion Drive.

Another look at the cliffs behind Motion Drive.

We were warned! The only real issue on this section is the Motion River crossing.

Motion River wasn’t easy to cross so we headed back.

Heather scales the rocks at the back of Middle Cove Beach.

The Middle Cove Beach trailhead is in the meadow at the top of the rocks.

A look back at the beach from the trailhead shows how popular it is.

The trail starts through woods.

Meadow and woods at the start of the trail.

When the trail approaches the cliff edge, the views pf Middle Cove are spectacular.

A trail marker on the approach from the north keeps hikers from following a trail that founders over the edge.

The trail heads uphill alongside some spectacular cliffs.

A trail marker keeps hikers away from private property.

The sea cave is visible below.

At the end of the cliffs, Houlihan’s River and Freshwater are visible for the first time.

Freshwater, where Houlihan’s River deposits. Quite a view for the property owner.

The bench at Houlihan’s River.

Houlihan’s River and the path down to it.

A look back at rocky Freshwater.

The concrete structure at the end of Freshwater. A sewage outfall perhaps?

The end of the improved trail.

The approach to Motion River from the south. Perhaps the rocky beach would be the way to pass this point!

3 thoughts on “Silver Mine Head Path”