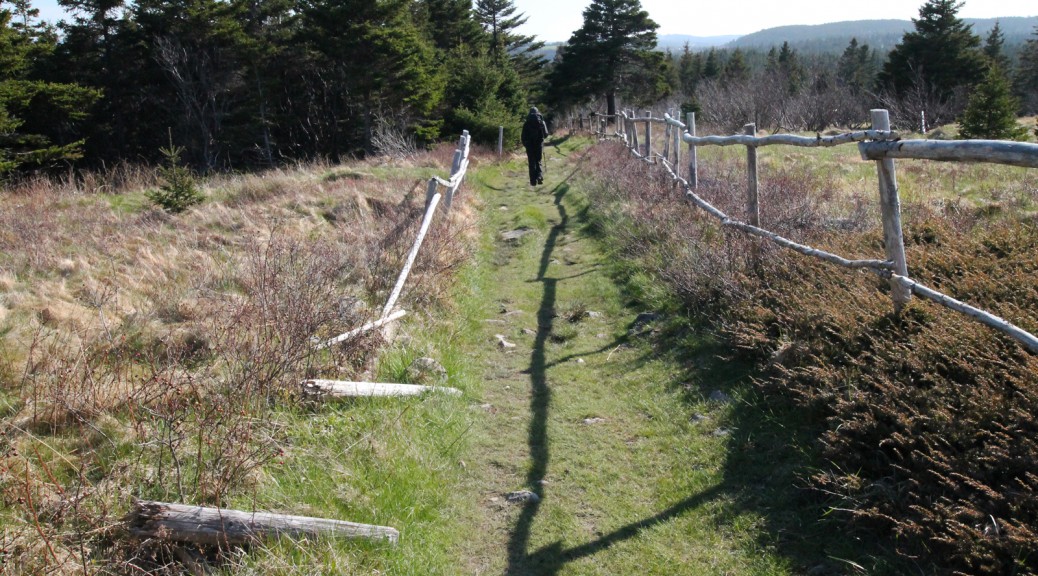 Hi folks! Last weekend, Heather and I managed to check off another section of the East Coast Trail: Father Troy’s Trail, a beautiful hike between Flatrock and Pouch Cove. It was a great example of the variability of Newfoundland hiking, and why you always have to come prepared… when we left the house, the sun was splitting the rocks, but driving out, we started seeing fog along the coast. The further north we went, the foggier it got. It’s a good thing we made the last minute decision to pack our caps and warm clothes!

The trail itself is spectacular. Starting in Flatrock, it’s obvious how the town got its name, as the trail passes over a stretch of nearly flat bedrock on the way out to a point of land called The Beamer. Similar to Torbay Point on the Cobbler Path, The Beamer is accessible, but I don’t think I’d try to traverse it in wet conditions: it’s much rockier than Torbay Point. Past the Beamer, the trail heads back in the other direction along the rocky shoreline as it rises in altitude. It follows a very high ridgeline for a couple of kilometers, rounding a steep gulch before an intersection where hikers can take the main trail or a secondary route to Church Cove. The sign for Church Cove states the trail is difficult, something we’d never seen on the ECT before, so we decided we’d try it another time. A few hundred metres beyond that, the trail again splits, with a cart path heading straight and a footpath heading towards Whale Cove, which isn’t indicated (at least clearly) on the ECT maps… but no worries, either trail gets you where you’re going. We took the Whale Cove walk and the scenery was spectacular. If you take the Church Cove side trail, you end up on this branch.

By the time we got to Whale Cove, the fog had lifted and we were in the sun. The trail is still at a very high elevation at this point and the scenery is spectacular. Just past Whale Cove the trail climbs and rejoins the cart path at an intersection with some fenced private property. It was bright and beautiful as we entered Torbay, where there seemed to be a bit more climbing than I remember… we had hiked the couple of kilometers between the trailhead and Gallows Cove Road before, and I guess I had forgotten the hills, especially on the Torbay side of Tapper’s Cove. That said, Torbay is beautiful and the way to see it is walking this coastline. We passed the beach at the end of the bay, and headed up to the trailhead as the sun set over Torbay behind us.

Check out some pics below!