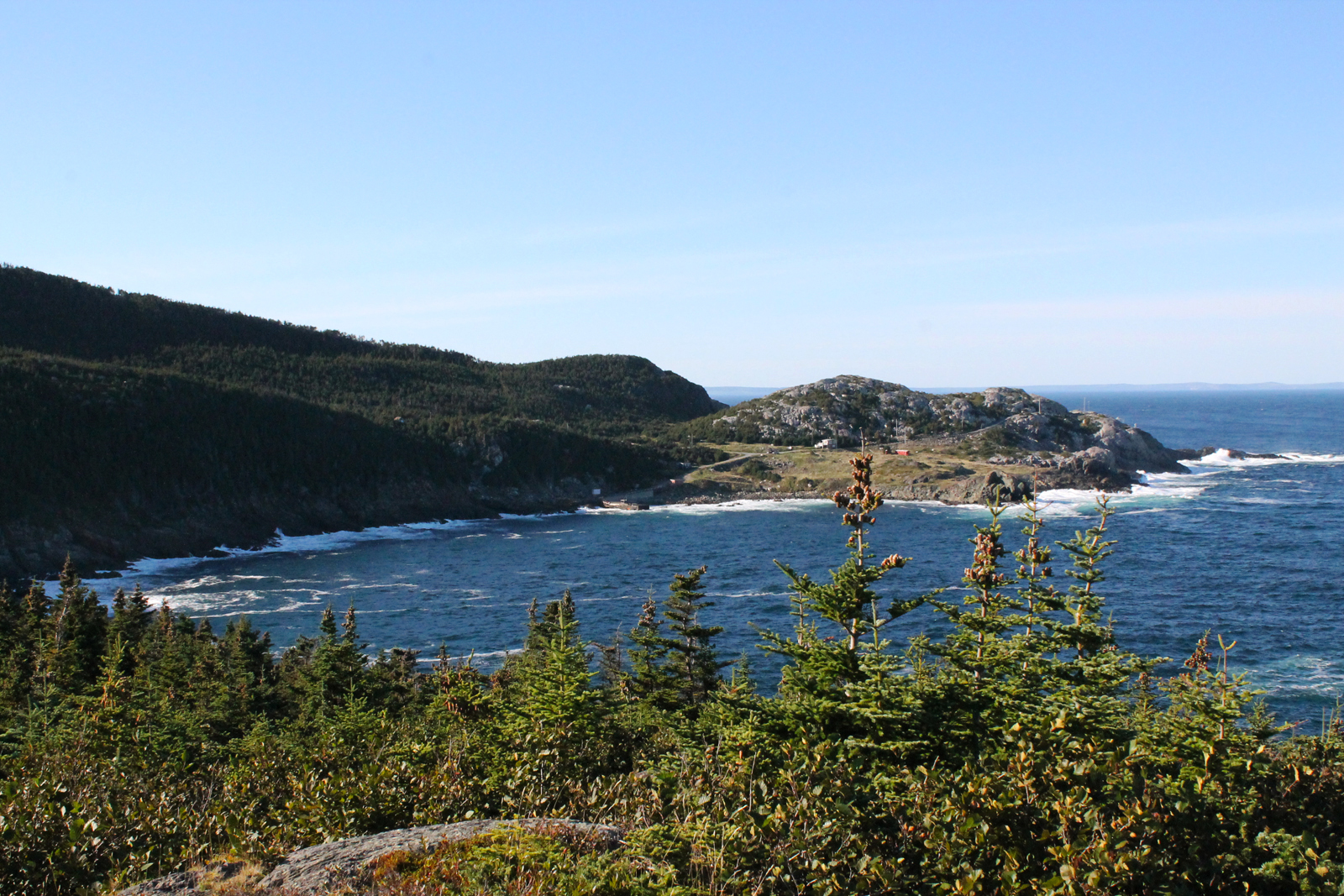 The Biscan Cove trail is the newest completed trail on the East Coast Trail: opened in 2012, it connects Pouch Cove and the lighthouse at Cape St. Francis. Hikers park at the softball field about 500 m from the trailhead, which can be found at a turnaround near the end of the community. The trail heads into the cover of trees and quickly comes out alongside the rocky coast. Following the coast for a few hundred metres, the trail heads up over rock, and continues uphill where it meets with another community trail and heads off to a viewpoint. A steep climb to the top of Little Bald Head is where we went wrong: from the Pouch Cove trailhead, the trail certainly looks like it continues straight once it crosses rock, and a hiker with his or her head down could miss the marker off to the right as we did!

The correct trail descends through trees on the other side of Little Bald Head, eventually reaching the viewpoint at Horrid Gulch. There is a spectacular story of a rescue conducted over these cliffs: head down to the trailhead and read the sign, it’s worth the time. Especially when you see the cliffs and realize that some brave soul lowered himself over them to save drowning men below. From the clearing atop Horrid Gulch, we could see a bald eagle perched on the side of Big Bald Head opposite us.

At Freshwater River there is a spectacular viewpoint that I highly recommend. A beautiful waterfall, rocky coastline, and based on our experience, a fairly good chance of spotting a bald eagle. We’ve seen eagles on multiple hikes at this spot: the first, a pair, one of which flew within 50 metres of us, clutching a fish. Incredible. As if that wasn’t enough, check out the video below:

This is one spectacular trail when the seas are rough!

Crossing Freshwater River and the couple of rivers that follow it can be a bit of a chore if it’s wet or has been raining, so exercise caution and bring good boots. Past these and through some cliffside woods the trail reaches White Point, the reason for its name is apparent with the waves crashing into it. The trail heads up around Polly Butts Gulch, traversing a steep slope, and heads out to Anvil Head to overlook Anvil Rock. Up over the hill, the trail crosses the hilltops until it reaches Biscan Cove, descending slowly to the edge of the cove and around it. The trailhead is slightly inland from the cove, crossing a concrete ledge at the former site of a United church. We made our way back along the road, a straight walk of approximately 4 km.

For the scenery, this is perhaps my favorite of the East Coast Trail hikes. Check out the pics of this spectacular trail below! Click to enlarge!

As the trail exits the woods and the fenced private property, a gulch appears on the right.

Traversing over rocks at the start of the trail

The trail scales this short rocky section before meeting the Water Witch trail and a side trail to a viewpoint.

The view north from the viewpoint.

A look back at Pouch Cove from Little Bald Head.

The trail continues to the right. Doesn’t it look like it should continue straight? This is where we went astray on our first attempt.

North from atop Little Bald Head.

A river where a community ATV trail meets the Biscan Cove Path.

The viewpoint at Horrid Gulch, where a spectacular rescue was conducted.

Incredible to think someone scaled these cliffs in stormy conditions.

An eagle watches from the trees on Big Bald Head.

When we arrived at the Freshwater viewpoint, the waves were so vigorous they had kicked up mist at the waterfall!

The waterfall and the view north from the Freshwater viewpoint.

There was a little trouble crossing Freshwater River for a couple we met on the trail.

White Point, white waves behind it.

The view of Big Cove from White Point.

Some crazy waves in Bog Cove!

The trailmarker at Anvil Rock.

The view from the headland as hikers round the edge of Biscan Cove is spectacular.

Biscan Cove from atop the final climb.

A wooden bridge makes for an easier river crossing.

The trail marker at Pigeon Island.

The fallen tree in the pool behind the concrete pillar that must be crossed.

The trailhead at Cape St. Francis.

At the site of the former United church.

The lighthouse, and the future trailhead for the Cripple Cove Path, are 500m beyond the trailhead. We were down there the week before and since there are few photo ops we opted against doing it again.

The road to the Cape St. Francis lighthouse and the Cripple Cove Path.

An old cemetery on the road back to Pouch Cove.

One thought on “Biscan Cove Path”