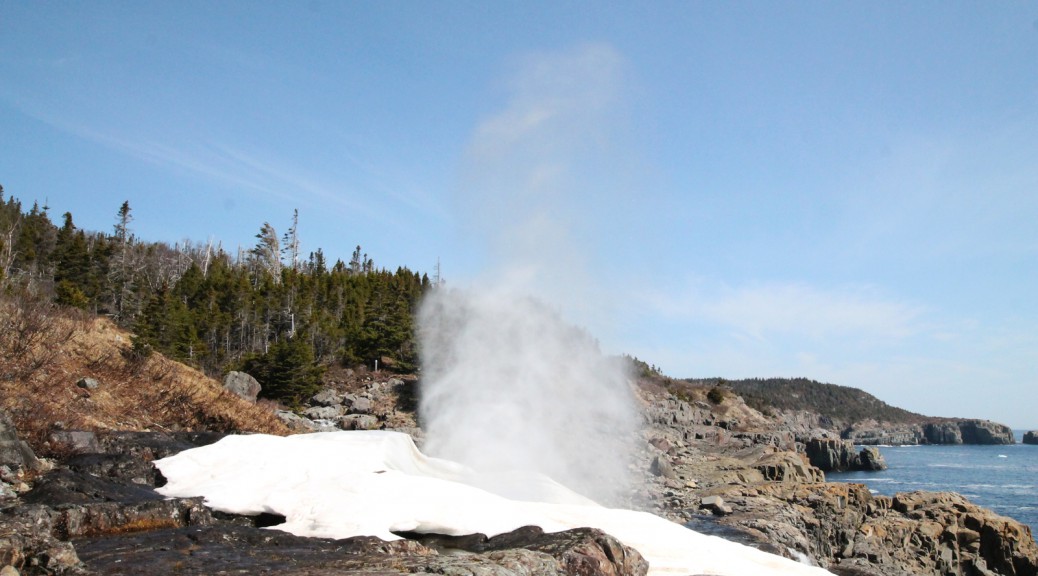 The Spout Path is, to a certain extent, the East Coast Trail’s flagship hike. It’s among the most challenging hikes on the Trail, and it features, along with perhaps Berry Head Arch, one of the most memorable features along the trail: the Spout itself. There are other spectacular features along this trail that make it a must-see as well. That said, it is a difficult trail: not for the beginner or the ill-prapared!

My Spout Path hike was done north to south, starting at the end of the Motion Path, where I spent the night previous. The trail begins at the end of Shoal Cove Road. The location of this trailhead is one of the challenges of this path, to be sure; it can be approached as I did, by hiking out the Motion Path, or by hiking in the Shoal Cove Road path, but either choice adds a significant number of kilometers to the hike.

The trail heads inland around the site of a cabin, and passing a couple of rivers including a bridge over the scenic Queens River, it heads back to the coast, crossing over the large, flat sections of coastal rocks at one point. Skirting a couple of gulches, the Spout is visible in the distance for the first time, rounding Long Point. From Long Point, the trail follows the high cliffs around to Long Point Cove.

The trail passes gulches approaching Miner Point, and after another short trip over a wooded path, the trail emerges opposite the Spout on Spout River. While the view of the Spout is great from here, it is easily approached from the other side. It’s an incredible sight: a wave-driven geyser, spraying once every 20 or 30 seconds, sometimes metres into the air. Just over half a kilometer from the Spout is a campsite, at Little Bald Head, where hikers who want to make the hike out to the Spout a two-day journey can set up camp.

Just past the Little Bald Head campsite is a spectacular site: the first of a few truly spectacular sea stacks visible at points along this trail, but in this case, one is topped by a bald eagle nest! As I passed, the female was nesting and the male stood in a tree above. Truly incredible. Another sea stack is visible at nearby Drop Cove, after which a section of challenging rocky hiking through a wooded area makes the going slow.

The trail passes up and around several gulches, including the Chaver, where the trail passes very close to the edge, offering spectacular views. The section of the trail between here and Freshwater was one I found particularly challenging: it was hot, I was tired, and there is a lot of up and down as the trail follows the high cliffs along the coast around a variety of coves and gulches. The trail opens up a kilometer or so before Freshwater to Bald Head River.

Freshwater is a beautiful place, an open space with signs of former settlement, a roaring river, and a picnic table for hikers to take a break. I didn’t stop to explore: I’ll leave that for the next visit. From here, the trail heads around Monkey Cove and Dungeon Cove before approaching the Bull Head Light, an operational lighthouse that hikers can check out. Past Bull head Light, the trail follows the coast around Useless Bay and over Cape Boone to Gun Ridge and the trailhead.

Unfortunately, I didn’t take as many pictures as I needed to in order to really capture this trail completely: I stowed my camera after passing the sea stacks with the eagles. More pics will come eventually.

Check out some pics of the trail below!