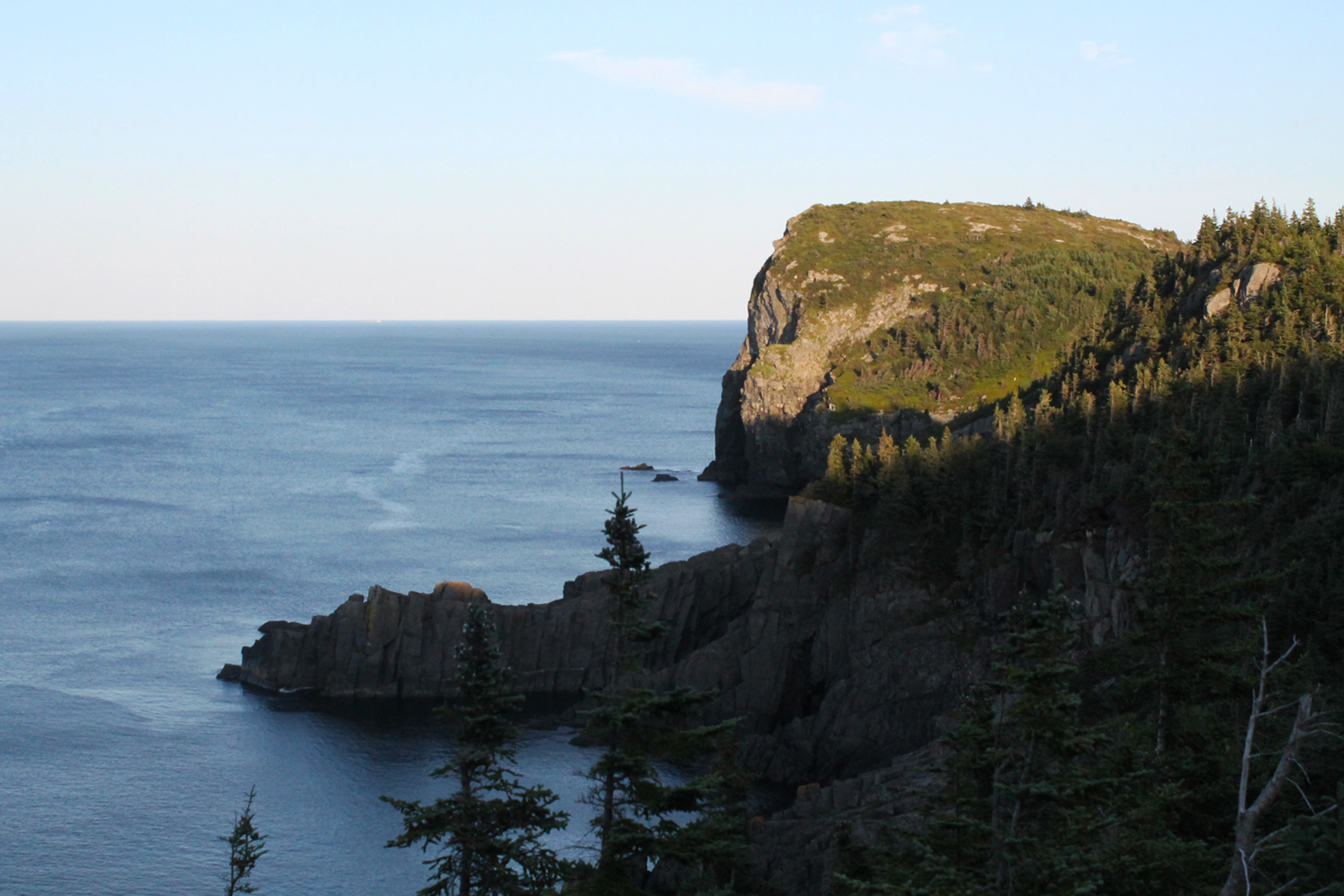 Picking up where the La Manche Village Path leaves off (that is, in La Manche Village), the Flamber Head Path, perhaps the one of the more challenging hikes on the ECT, connects the village to the beautiful town of Brigus South via an 11.3 km trail. While its length is comparable to an afternoon hike, it has some significant climbs and descents, and plenty of wet patches, and the access trail and side trails add another 3 km. A true hike.

The trail begins at La Manche Village, after about 1.6 km access trail from a turnaround in La Manche Park. Heading along a rock face to the shore, the trail winds past the concrete and stone foundations of the Village and a quarry that was used for stone in the community. Climbing over the rocks, the trail heads through a wet woods and climbs the hill to the south of the village, offering one last glance back at the picturesque cove. From there, the trail climbs to Herring Cove Point, with a short side trail that leads to a rest stop and a viewpoint.

The trail rises and falls as it skirts Bluff Head Cove, over Bluff Head, and then around Money Cove, where the first view of the spectacular Cape Neddick is visible. A side trail climbs to the top of Cape Neddick, promising a commanding view. Climbing behind Cape Neddick to False Cape, the trail covers very high ground around Big Cove before descending to Gentlemans Head, a point of land at the edge of Freshwater Bay, a large expanse which has at its other end Flamber Head. From Gentlemans Head the protected Quays and Little Comfort Cove are visible, as is the waterfall of the Freshwater River as it enters the bay.

The side trail to Flamber Head is certainly the highlight of the trail, a spectacular climb that offered views of Freshwater Bay on one side and Roaring Cove on the other, with impressive cliffs, a huge sea stack, and deep gulches on all sides. Leaving scenic Roaring Cove after spending the night in my tent on one of the three platforms available, a short side trail provides a look over Jefferies Gulch and back over Roaring Cove. The trail continues up and down, with side trails at High Cliffs and aside Deep Cove providing spectacular views, and winding around Deep Cove itself, a beautiful protected cove where I observed a pair of loons diving for food in the still waters. Continuing to skirt cliffs, spectacular views are available from side trails at Deep Point and Soapy Cove, after which the trail descends close to sea level, passing over the rocky shore and requiring a little climbing before meeting with an old community path and descending into beautiful Brigus South.

Click on any of the pics below to bring up a more detailed view!

The access trail into La Manche Village passes over the bedrock the Village is perched on.

The first signs of settlement as we enter La Manche Village.

A pool in the La Manche River just behind the community.

The foundation of a house in La Manche Village.

From the location of the Village, the suspension bridge on the La Manche Village Path is spectacular.

I happen to like graffiti in general, but tagging something historic and irreplaceable like this is not okay.

The trail begins along a sheer rock face.

The foundations that remain are a mix of stone and concrete.

The first of many climbs is a wooden staircase constructed over the rocks by ECTA volunteers.

One of the many river crossings.

A rest point at 0.9 km might seem early in the hike…

A steep descent over wooden stairs.

The islands of the Witless Bay Ecological Reserve are visible from the high trail.

The trail markers are a little older than on other trails and are a welcome sight.

The first view of Money Cove Point and Cape Neddick is spectacular.

The trail skirts the gulch at Cape Cove at the north end of Cape Neddick.

The side trail to the top of Cape Neddick. I was pressed for time and continued on, sadly.

From the top of False Cape, Freshwater Bay is visible for the first time.

The side of Gentleman’s Head as the trail approaches it.

The gulch and meadow at Gentlemans Head.

The spectacular rapids at Freshwater River, where the trail crosses a rocky beach.

The bridge over Freshwater River at the bottom of the bay.

The Roaring Cove campsite, tent platform in the background.

The next morning. This camping platform was a godsend as light was getting low!

My Katadyn water filter was also a godsend after dehydrating myself on the march in! Roaring Cove River provided deliciously cold water!

Despite “no open fires”, there have obviously been a few.

Toilets exist though I didn’t check them out.

This sign was a welcome sight at the end of the first day!

All of Freshwater Bay is visible from the top of Flamber Head.

A gulch at Flamber Head.

Cape Neddick and False Cape at the other end of Freshwater Bay.

The trail winding up over Flamber Head. Don’t skip this side trail!

Packed up and ready to go!

A look back at Roaring Cove from Jefferies Point.

Jefferies Gulch, just beyond the campsite, the morning sun shining in.

Plenty of wet patches with rock crossings. Watch for the shifty rocks!

A viewpoint at High Cliffs.

Hares Ears and Johnny Hayes Point on either side of Deep Cove.

The trail descends to the cliff-protected, picturesque Deep Cove.

One of a pair of loons diving in Deep Cove.

The pair of loons, one diving and the other watching.

Past Deep Cove, another river crossing and steep ascent, commonplace on this trail.

A look back at Deep Cove from a side trail aside it.

The Southern Shore spread out from Deep Point.

Soapy Cove from the trail above.

The viewpoint past Soapy Cove provides a view of Grumpy Man, a rock at the end of Soapy Cove.

The best look at Grumpy Man I could get without being unsafe. At least you can see that it’s separate from the mainland.

Frenchman’s Head, where the trail turns towards Brigus South.

Brigus South is visible for the virst time from Frenchman’s Head.

The trail descends over bedrock, requiring some climbing.

The stone path through the wet ground along the shore.

Either Horse Gulch or Long Point Gulch, either way, massive!

The trail heads over rock and back onto land at Long Point Gulch.