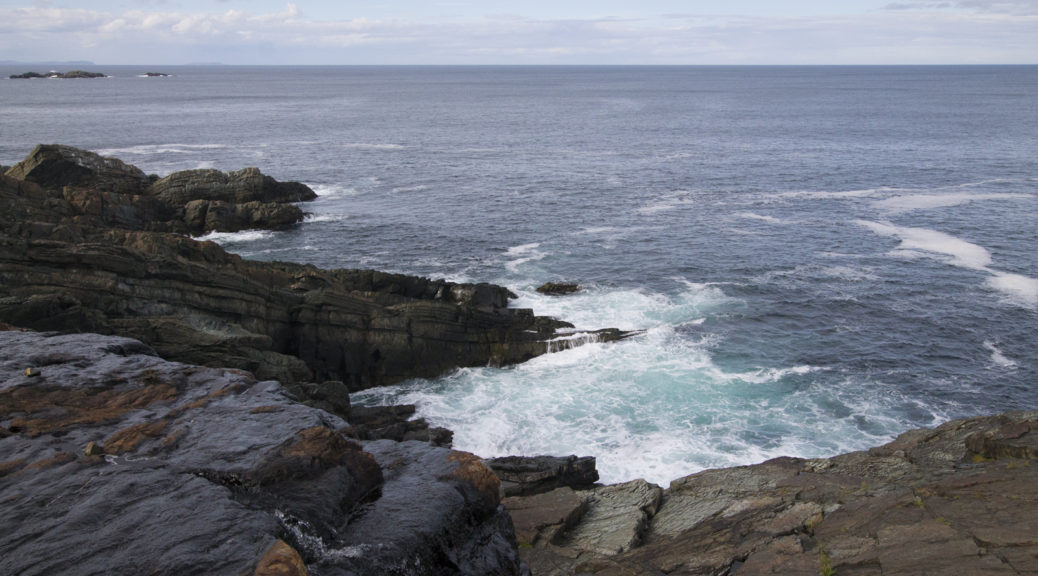 Hi folks! Back to work, so the last two weeks of semi-regular hiking are coming to an end, but I managed to squeeze in one last hike on an old favorite on Friday, Mickeleen’s Path, and with my work schedule being somewhat sensible today, I got out for a speedy afternoon hike on Biscan Cove Path. I count that as my last summer hike because I’m mentally not 100% back to work yet 🙂

It looked like a nice, cloudy day for my Mickeleen’s walk on Friday, but as I pulled onto Quay’s Road, it was raining. Just a shower, but there were enough little showers at the start of the hike to have me stowing the camera for the vast majority of it. While I don’t have many pictures, it was a wonderful hike: I made great time, saw some awesome scenery, stood in the wind on South Head and sat on the rocks at Chest Cove. Good memories, if not good pics. It was great to see some traffic on the trail as well. Here are a couple of the pics I did take:

Chest Cove is a wonderful place for a break.

I got one of the trailhead at the end, at least!

Today’s hike on Biscan Cove was definitely one for the ages. I was finished my afternoon session at work at a sensible hour, and having predicted that, packed my bag at lunch so I could scurry off to the trail. I vowed to power through the hike but saw lots of picture opportunities and explored new territory a little bit (which is incredible, given that I’ve hiked this trail about 20 times).

While I didn’t get any pictures to prove my stories, I had three very cool wildlife experiences. There is an eagle nesting somewhere along the trail, probably two different nests actually, and I always see one south of White Point. Of course on arriving at White Point I scan the trees to the south, and very close to me is Mr. Bald Eagle. I gingerly set down my pack, reach in, grab my zoom lens… and he takes off and is, in moments, gone around a cliffside. So close. Next, walking out along the road to Cape St. Francis, I was humming to myself, when a bird of prey swooped low over the trees in front of me, across the road, and then down over the edge of the trees on the other side. I ran to see if I could catch a glimpse but couldn’t get another look. I barely saw anything, so there are a wide variety of birds it could have been (a downward-looking hawk or an owl?) but it was cool nonetheless. Finally, pulling out of the softball park (at which there was a softball game and half of Pouch Cove by the look of it), a GIGANTIC moose, full antlers, ran across the road about 10 feet to my right! He was quickly in the woods behind a house along the main road. Pretty wild.

Anyhow, a few pics from today’s hike, with a little physics chat! Enjoy!

A late afternoon hike on my fave!

Sat down in my secret spot and saw this massive thing! That’s my hand for reference. It’s a great time of year for mushrooms. Thinking this is some kind of Bolete but I didn’t look too closely.

The view north from an unofficial viewpoint.

Looking back towards Pouch Cove.

Freshwater River empties into the ocean. Have seen many eagles here.

Ok class, physics lesson. Does anyone see anything in this picture that might be applicable in a classroom?