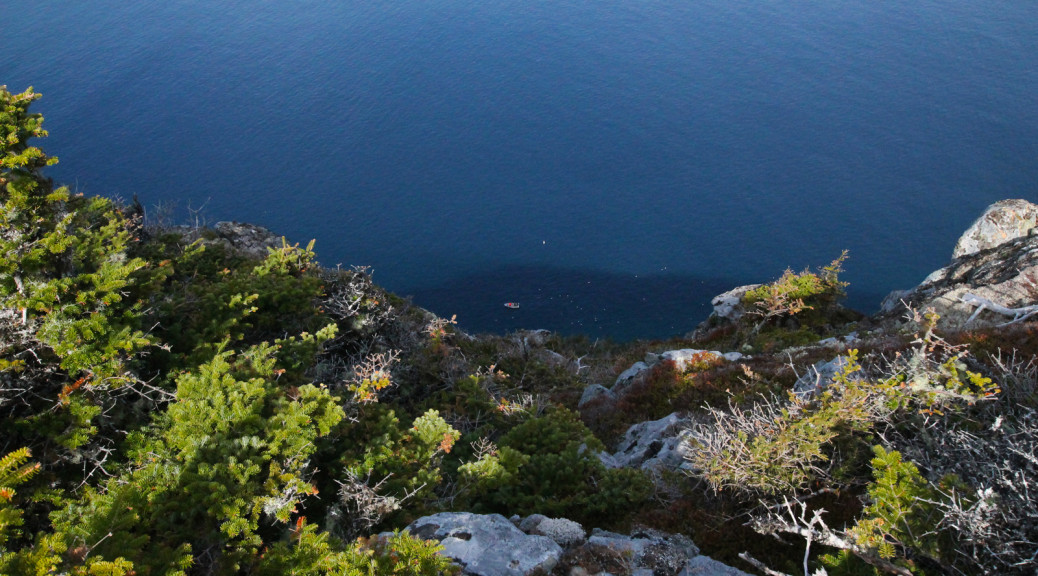 The newest trail on the ever-expanding East Coast Trail, opening in late 2015, is known as the White Horse Path. One of the more challenging legs of the East Coast Trail, it’s 17.5 km in length with elevation changes of well over 100 m at a number of points on the trail, with the trail reaching 200 m at its highest points. The length and the elevation changes combine to make it a Strenuous hike (both in reality and according to the ECT rating system).

The trail begins near the end of the Biscan Cove Path: from its trailhead, hikers head north on the Cape St. Francis road until rounding the corner to the lighthouse, at which point the trailhead is on the left. A short climb brings the trail to the top of bare rock, after which the trail descends to Back Cove, obviously a destination for local ATV traffic, and then up the other side of the cove. At the time of writing, at the end of the climb out of Back Cove, hikers will find the first of two rope-assisted climbs, the second a short distance from the first heading down the hill towards a patch of starrigans, ghostly dead trees, on the west end of Back Cove. Rounding this point, hikers head inland and up around Big Cove (North), the first significant climb of the trail, to a ridge that presents views of Biscan Cove on one side and Big Cove on the other.

Heading down towards Cripple Cove, a side trail marks the old route for this trail, which exits onto the Cape St. Francis road. From here, a mostly downhill trek brings hikers through some insect kill and deadfall and out to Cripple Cove, a couple of hundred meters from the trail on another side trail. Beyond Cripple Cove, we find another significant climb: starting over bald rock and entering short trees at the top of the hill, hikers will quickly find themselves well above Cripple Cove.

This elevation is maintained for a while, crossing first bald rock and then short brush, but soon a level stretch becomes visible at a lower elevation and the trail drops to that point, crossing through patches of insect kill and wet trail. I call this insect kill, but in truth I’m not positive that’s what’s responsible for all the dead trees along this trail. From above this point, though, the trees appear to be dead in patches, which eliminates forest fire for me. At any rate, the deadfall in these sections can be challenging. Passing through a regenerating section, another huge climb is visible above. If I remember correctly, it is on this climb that a particularly difficult to pass deadfall is found: climbing around it on the steep slope was treacherous. Hopefully this is cleared by the time the trail opens.

The hilltop in this section is much more wooded, but hikers should be careful not to wander off on animal trails which can look a lot like hiking trail. At the time of writing, the trail was well marked with red and black blazes where the black and white signposts weren’t yet placed, so watch for those. The elevation drops once again before the trail enters the Marine Drive Provincial Park, marked by ECT signage. Crossing a couple of small rivers near the park boundary, another significant climb faces hikers before Trout Pond becomes visible on the left. Past Trout Pond, much of the trail is through forest, with one more significant elevation gain before dropping to the connecting trail which heads out the to the Marine Drive waterpark. From here, the descent into Bauline begins, and with a few exceptions, the trail heads for the most part downhill, through forest, to your final destination.

I started from the old entrance, skipping the first section that I had hiked a couple of days previous.

The intersection of the old and new sections of trail. From here towards Cripple Cove.

An erratic along the path in the Cripple Cove section.

The Cripple Cove Rocks visible from the western end of Big Cove North.

The trail along the peak above Big Cove North.

White rocks as the trail opens up above Cripple Cove.

Looking forward to the trail above the Scrape and on to Bauline.

Climbing down to Cripple Cove.

Climb around the rock on the right side to get down to Cripple Cove.

The view of Cripple Cove from the signage.

Cripple Cove is a beautiful spot!

Heading back, the branch at the Cripple Cove side trail.

The steep climb up to the Scrape.

Looking back down towards Cripple Cove, far below.

The trail is a little steep and rough in spots.

Another look down at Cripple Cove from an even greater elevation.

The walk atop the Scrape is very barren!

One more look at Cripple Cove far below!

This white lichen was plentiful.

The ECT put in work placing these trail markers!

The trail south across the barren hilltop.

A look down at some signage below.

Signs in some key spots to keep hikers from taking branches.

This section of trail is well-marked, atop the Scrape.

The elevation is massive here. It’s hard to translate the perspective to a picture.

A beautiful section of trail through tree cover.

There were wide swaths of tree kill along this trail. A few moose paths and a section are visible on a flat section below the trail.

The trail extends into the distance.

Bug kill along the trail. Careful in these sections as it is easy to go astray.

The trail is on the other side of this mudhole.

Back out into the barrens.

Some signage at major points of interest including Patch Brook.

Signs of moose are plentiful along the trail.

Pay close attention to blazes in these confusing sections!

A clear section before a major climb.

The trailmarker is visible well above us.

Interesting erratic on the climb!

A steep scramble in spots.

A look alongside the trail gives some perspective as to the steepness of the hill.

The aforementioned trail marker with the clearing below.

The beautiful view of Conception Bay stretching out to the south as we walk high above it.

About to make a downward climb.

The boundary of the Marine Drive Provincial Park.

Just past the sign and across a small river, another significant climb.

Scenic Trout Pond. I decided against trouting and decided to stay warm.

Getting started at Trout Pond the next day!

The sun is bright looking south!

Fiddleheads were everywhere. I’d still like to try frying some up.

A look back at some of the scenery behind us.

Some more perspective… A fisherman WAY below us!

The scenery from up here is pretty incredible!

The camp and playground area at Marine Drive Provincial Park.

South from that point.

The trail markings for the side trail to Marine Drive Provincial Park.

Signage at the Park entrance.

The view from the western end of the Park.

Looking back after passing the Park.

Looking down at Crow Head Pond.

Bell Island is visible clearly from this point.

The first view of Bauline below.

After climbing some big hills earlier, I skipped Big Hill on the side trail close to Bauline.

Signage has been here for a while, it seems.

Some community use on the trail close to Bauline.

Rounding the corner into beautiful Bauline.