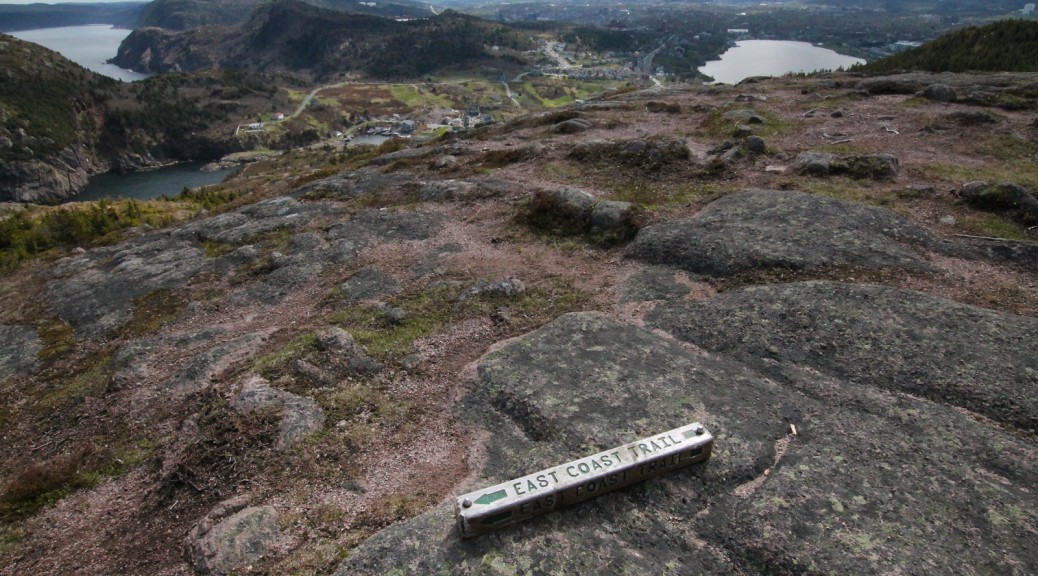 Hi Folks! June 7th, 2014 was International Trails Day, and I decided to celebrate by hiking the Sugarloaf Path, a popular trail that starts at Memorial University’s Marine Lab, and ends at Quidi Vidi, in St. John’s. The trail skirts the coast just past the eastern edge of the city, and features some spectacular scenery and a couple of steep climbs! It was hot, and it certainly seemed to get hotter as I climbed those hills!

The trail starts in the Marine Lab parking lot, and the first 500 metres of the trail are a steep uphill climb. The view from the top is spectacular , though, with high, rocky cliffs stretching in both directions, the Cobbler Path to the north, and Sugarloaf Head to the south. From there, the trail continues uphill to Sugarloaf Head, the highest point on the early section of the trail, after which the trail enters the wooded hills for a couple of kilometers. The shade of the trees was certainly welcome.

This trail passes the St. John’s municipal landfill (ie. the dump), and unfortunately, a fair bit of garbage makes its way to the trail each winter, but come spring a team of volunteers makes its way along the trail and cleans it up. The volunteers have done a spectacular job this year of cleaning the trail: there is very little garbage remaining until a stretch of trail directly alongside the dump for 100 m or so. The vast majority of what blows down to the trail each winter consists of plastic shopping bags… folks, this is precisely why you should use recyclable/reuseable shopping bags!

Past Robin Hood Bay, the trail opens up to a beautiful grassy area, with deep gulches on one side. The trail enters woods again and descends to John Howards River, red with iron. The trail passes close to the rocky coastline here and the geology is pretty fascinating. From there, the final climb to Bawdens Highland is a bit of a challenge on a hot day, but it comes in spurts and sections of it are again through the shade of trees so I could keep up a good pace without overheating.

Rounding the top of Bowdens Highland, a spectacular view of St. John’s is afforded. It really is a beautiful city! From here the trail descends fairly steeply over stairs and rocks towards Quidi Vidi Gut and the scenic Quidi Vidi Village. I saw more than one red-faced hiker ascending the hill… this is a popular section of the trail, being so close to St. John’s! It was great to see so much traffic on the trail! From here, it’s a short hike alongside Quidi Vidi to the trailhead at the end of the pond.

In the last couple of weeks Heather and I have started the final push to complete the entire East Coast Trail… only 7 paths left to hike!

Quite the International Trails Day hike! Check out the pics below!

The trailhead is located in the Marine Lab parking lot.

Even on this scorching hot day, a wisp of fog!

The first 500m of trail consists of steep climb.

The view from the top is a nice reward!

Looking ahead to Sugarloaf Head from the first viewpoint.

Scenic Logy Bay with the hills of Cobbler Path in the distance.

The trail passes close to a gulch approaching Sugarloaf Head.

Off in the distance, near Cape Spear, a massive iceberg!

Much of the first half of the trail passes through shaded woods.

Getting close to the landfill.

A climb down always means a climb back up.

From the viewpoint near the landfill.

This little rabbit let me get very close!

Looking back at Sugarloaf Head from Robin Hood Bay.

This grassy spot, as the ECT maps describe, is scattered with bleached bones.

A gulch alongside the trail.

Looking down at John Howards River and the rocky shore.

Past Joh Howards River, these vertical strata are fascinating!

The trail crosses the road to the pump station.

The start of the last climb, off the pump station road.

Bear this in mind, folks! We saw some riders on Father Troy’s Trail.

Finally! What a view.

The climb down to Quidi Vidi.

At the bottom of the hill, the trailhead!

Hikers should be aware of the criss-crossing bike trail.

Now this is graffiti I can appreciate, beautifying a sewage treatment building 🙂