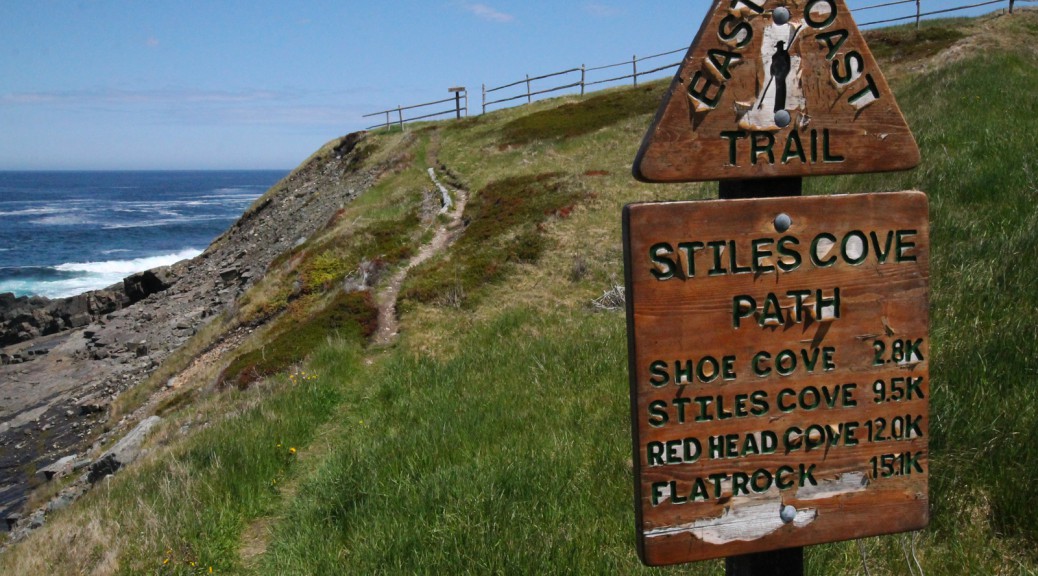 Hi folks! Apologies for the lack of posts for the last month or so. Of course this back-to-school experiment has been keeping me busy, and when I’m writing papers I’m rarely in the mood to sit down and write posts, but that’s not all of it. I hurt my knee hiking on the Stiles Cove Path trail about a month ago, and since I haven’t been able to hike much, especially with the beautiful weather we’ve been having, I’ve been too frustrated to blog about hiking. I’m currently in recovery mode: I tried a couple of short hikes, and tested myself with a slightly longer one, and I’m still feeling some pain. I’m continuing to rest and exercise my knee, but it’s frustrating to say the least! At any rate, I do have some nice pics from the last couple of hikes to post, so on to more pleasant fare, and hopefully my knee improves quickly so I can get out there more often to take more pics!

I had a spectacular Saturday for the Stiles Cove Path! I parked in the lot of the church in Flatrock, and got a cab up to the other trailhead in Pouch Cove. I was pretty stoked about getting out on the trail: I had hiked portions of this trail on a number of occasions in the past, but never the whole thing; there was a section of five or six kilometers in the middle of the trail that I had never seen before, including the trail’s namesake.

The cutaway section a km or two from the Pouch Cove trailhead has gotten larger. I’m not sure what the point of all that destruction is, but some forward thinking might have been in order: if they’re planning residences, there are folks like me who actually like having trees on our property, and we’re the type who would gladly share our property with the ECT. And as for things I comment on whenever I hike this section of the trail, that strange metal mesh object is still in the woods approaching Shoe Cove. Weird.

I was climbing down the hill towards Shoe Cove, just coming off the steps, when I heard someone frantically calling a dog. I quickened my pace and hurried towards the river at the bottom of the hill, and the frantic shouting continued from the other side of Shoe Cove, from the trail as it descended towards the cliffs of the cove. Suddenly, I saw a big, fat chocolate Lab chasing something through the woods at the edge of the cliff, and then back towards the trail. By the time I got to the bridge, the dog had rejoined his frantic owner on the trail and was approaching me, breathless, from the other side of the river. I stopped and chatted with him while they both caught their breath. I’m not sure what the dog was chasing, but it was big enough that I thought it may have been another dog; I asked, but it was just the two of them, so a fox or a coyote, perhaps? At any rate, that was very close to a disaster, folks: the ECT can be a very dangerous place for animals, and it’s best you keep yours on leash!

At any rate, I was treated to some spectacular weather and scenery. The trail is spectacularly beautiful from start to finish, and at 15 km, it’s certainly something most relatively-in-shape hikers can accomplish in a day. I certainly wasn’t worried about it. I started feeling some knee pain at the 7 or 8 km mark, though. I had felt this particular type of pain before, and wasn’t too worried, but by the time I was approaching the last couple of kilometers of hiking, I was in significant pain, and had no other choice but to finish the hike. Uphill hiking was fine, but downhill was painful, and steps were agony. And this trail basically ends with steps. I grinded the last couple of kilometers out but I wasn’t feeling good by the time I got back to my car.

I’m starting to feel better, at any rate, and I did get to see some spectacular trail! I managed to snap some great pics to add to my collection from along this trail. Check them out!

An iceberg in Flatrock, the Beamer behind it.

From the Grotto at the Church where I parked.

Stepping onto the trail, the big seas and big sun made for a promising start!

The cutaway a km or two into the trail. Just so much unnecessary cutting.

The last time I was here, this hill was covered in ice!

Some kind of psychology experiment is still my guess.

A look at the Grazing Grounds beyond Shoe Cove.

From the Grazing Grounds, Shoe Cove Island is visible for the first time.

From the bottom of Black Head Cove.

A sad memorial to a hiking buddy.

The crossing at Spout River is elaborate: maybe this river gets heavy in the spring?

A gulch on the approach to Small Point.

The trail passes a grassy spot at Small Point.

A look back at Small Point.

Now that’s not a nice name.

As the trail opens to Stiles Cove, the falls at its base are visible.

A second set of falls into rough seas at the end of Stiles Cove.

Half Moon Brook is the river that feeds the falls at the base of the Cove.

The river crossing at Half Moon Brook.

A memorial at a section of flat rock along trailside. Particularly sad that two friends died here.

The site of the memorial.

Damage to the trail by ATV riders.

The falls at the end of the trail.

These steps, cut into the rock, fascinate me.

The setting sun provided some nice lighting for the end of the trail.

Waves crashing at the trailhead.

One thought on “Long Time No Post! Stiles Cove Path Hike and Fallout”