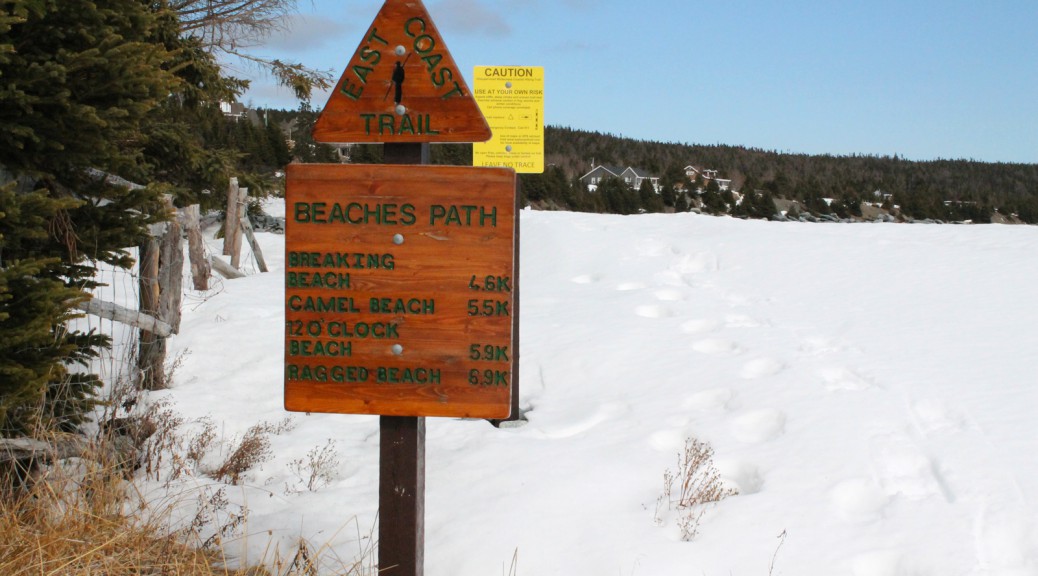 Hi folks! It was bright and sunny for the most part yesterday, and I was ready to hike fairly early, so I figured I’d take advantage spend a few hours in the woods. I decided to snowshoe out over the beautiful Beaches Path between Witless Bay and Mobile. Hoping that the trail was in the shape that the neighboring Tinkers Point was in, I strapped on the snowshoes and headed out. As you can see from the pics, this trail required the snowshoes, and required a bit more trudging through snow than what I had seen on my other snowshoeing trips this spring! It was great fun, firing through the mostly unmarked snow past Breaking Point at the 2.8 km point. That made for 3.5 km or so of immaculate snow-covered trails through thick woods with little wind and the sun beating down: spectacular!

I made my way to the Mobile trailhead and headed back, which was made somewhat easier by following my own footprints through the soft spots. There were plenty of those, as the spring weather has started to soften up the wet spots. The places where plank bridges cross marshy areas are interesting tests on snowshoes, as they’re typically covered with pillars of snow. Crossing rivers and climbing stairs are definitely the bane of the spring snowshoer’s existence. There was deadfall at regular intervals as well, unfortunately: the volunteers have a bit of work ahead of them once the snow melts. Most are easily passable and the one that’s tough to climb can be detoured around.

The trail is easy to follow from start to finish, especially now that my big feet have been over it! I encourage you to get out and check it out… be cautious when the trail approaches hills and crosses rivers and you’ll be good! Check out the pics below!

This nice couple and their cute puppy started on the trail when I did.

The trail was snow covered as it entered the first patch of woods.

Up over the hill from Peters Cove into the woods towards Twelve O’Clock Beach.

The first look at Camel Beach.

The crossing at Camel Beach is pretty, but be careful on those big clunky snowshoes!

Some brave souls had gone as far as Breaking Point without snowshoes. Most of the trail was fine but they went through a couple of times.

A little beach is visible at Breaking Beach.

Trying to recreate the cover page picture. Not quite the same!

Some of the deadfall the wonderful volunteers will have to deal with.

The far end of Breaking Beach from Breaking Point.

Looking back at Breaking Beach from Breaking Point, metal remains from the wreck of the Apenine are visible.

Past Breaking Point, no human footprints on the trail, but at one of the gulches near Little Bald Head, a LOT of moose prints!

This loon-looking bird (identity coming!) dove at around Webber’s Cove.

The same raven tricked me with his “coo… coo” call last year, I’m sure of it!

The immaculate trail was a pleasure to walk.

Not so much pleasure.

More of the sunlight on the untouched trail.

The “cross the plank walkways” game was always fun!

The rough seas had pushed plenty of seaweed onto the ice.

The trailhead! Time to head back!

Some kids played on the beach on the other side of the Mobile River.

Stairs… the nemesis of the snowshoer who is too lazy to take his snowshoes off!

Nolan’s Meadow was bright and beautiful, but cold… the wind had picked up!

More of the “find the plank under the pillars of snow” game!

The south end of Breaking Beach.

Interesting how trees will grow around one another!