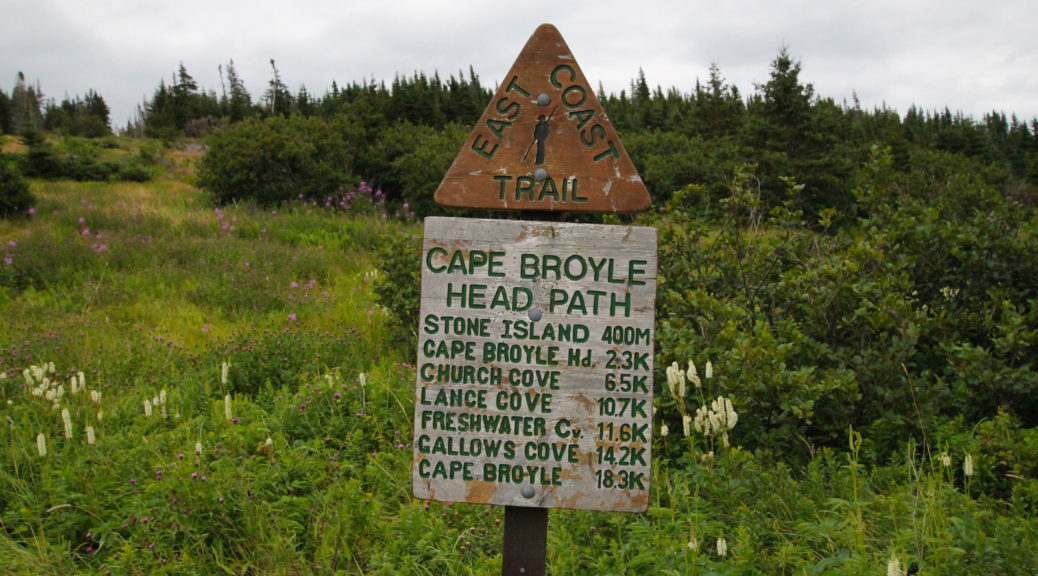 Hi folks! So these last few days of summer are all about me squeezing in my favorites, like I said… all of the hiking that I should have been doing in July and earlier in August. I couldn’t do a favorites list without Cape Broyle Path, which features my favorite place on the entire ECT: Lance Cove Beach. Just a treasure. I didn’t explore it for long this time around, but that just leaves more reason to go back again!

First, let me say this: the treadway is incredible. The last time I hiked this trail, the first 10km of it were badly overgrown, to the point where I lost the trail a couple of times. Thanks to the ECTA volunteers who have put incredible work into clearing that mess, I don’t recall a single point on the trail where there’s a clear width of less than 5 ft. What a job they did, and the work must have been very hard: hats off.

As I left St. John’s I still hadn’t arranged transportation from one trailhead to the other, but I was optimistic. I tried the two “cab companies” on the Southern Shore. Laughable quotes. At least the guy at Southern Shore Taxi was nice, explained himself, and let me know I’d likely find a ride if I was wearing a backpack anyhow. A+ Taxi and Tour, though, definitely get downgraded to an A-, at least, after quoting me $75 for the ten minute cab ride. Look, I know Cape Broyle is a ways away from Witless Bay where both cab companies are based, but you can get a regular cab fare in CBS, for example, which is pretty close to the same size if you’re talking Topsail to Seal Cove.  $75 is enough for ten trips to Cape Broyle for goodness sake. You can’t call yourself a taxi if you’re charging people an arm and a leg just to come down the road… if I’m not paying what the meter says, you’re at best a tour company or car service, at worst, you’re preying on tourists.

Anyhow, rant over, I gassed up and bought supplies at the Ultramar in Cape Broyle, and immediately found a ride when I asked around (thanks Danika!). Since my ride was leaving to head towards Calvert, I decided to hike the trail south to north, the opposite of last time. I think it was a great decision… it meant the long day was day 1, and it meant climbing Cape Broyle Head at the start of, rather than the end of, my hike. So, so much better.

Early in the hike was this burned out section:

Pretty shocking thing to stumble upon. Still smelled like smoke. In places the trail acted like a firebreak.

Burned out right to the top of the hill. Could have been much worse by the look of things.

IIRC, the supposed cause of the fire was a lightning strike. Scary stuff. However, think of these pictures when you’re lighting open fires along the trail… there’s a reason they’re not allowed, and this is it.

Anyhow, Cape Broyle Head was as fun as ever, but despite that I made good time to Long Will. That said, my plan was to set up, head down to the beach, and hang out there as it got dark to do some astrophotography. All human plans are subject to ruthless revision by Nature, as they say, though, and the clouds prevented that from happening. I had my fire and my time sitting in the sand so it was all good.

This morning was misty so I packed up the electronics, hence no pictures from day 2. The few times the sun peeked out weren’t enough to justify unpacking it. The only thing I saw that I really regret not catching on film was an immature bald eagle, perched on the rocks about 50 feet from the trail. It was pouring when I saw him so it wasn’t meant to be.

A few pics below, I was hoping to get more on day 2 but them’s the breaks!

Another grey day on the trail.

Mushrooms have started to show up along the trail… no idea what this is (russula something or other maybe?) but it was a beauty.

Passing over Blow Me Down, the crackerberries lined the trail.

Shag Rock Cove, where the sun almost came out.

The viewpoint trail at Long Will has that “magical trail through the woods” feeling, though it peters out just past this point.

I didn’t visit in daylight and didn’t want to backtrack so this is my only shot of Lance Cove Beach. Best place on the trail.

My mediocre hang made for an incredible night’s sleep! Never again, tents!