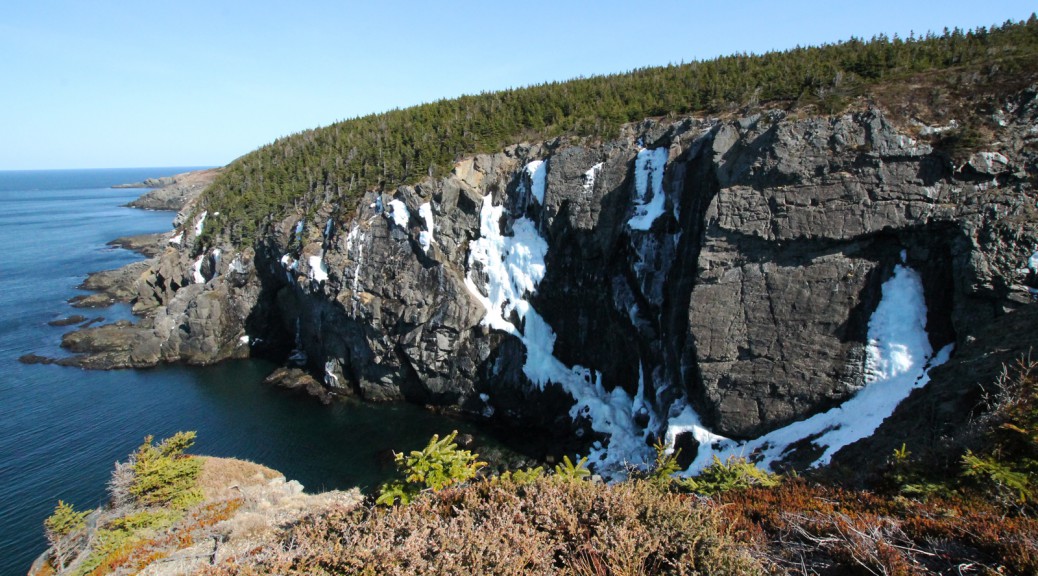 Despite the beautiful, cloudless sky, I found it hard to get motivated to head out for a long hike yesterday. Deciding on a short snowshoe into Shoe Cove along the Stiles Cove Path out of Pouch Cove, I strapped the snowshoes to my pack and headed out. The first part of the trail, alongside the ocean, was free from snow. So far so good. I kept expecting to see snow as I rounded each corner, but the trail was basically clear! Instead of a short jaunt to Shoe Cove, I made far better time than I thought I would due to the lack of snow, and so I continued onto Blackhead Cove before doubling back and heading back to Pouch Cove for a nice little 10k hike. My snowshoes stayed strapped to the pack the whole way.

Once I was on the trail I was glad I had gotten out. Not a cloud in the sky and no snow on the trail, the scenery was simply spectacular. I was so surprised to find the trail free of snow after the difficult trekking of the last two weeks that I was almost running the trail. I made such good time that ended up covering twice as much ground as I figured I’d end up snowshoeing.

On the return trip, climbing the hill out of Shoe Cove, I could hear ATVs coming down the Shoe Cove Road path. So much for the peace and quiet of the trail, but I guess there’s not much to be done about it since the ECT heads close to many towns. They didn’t have to be quite as obnoxious as they were, though, spending the next 20 minutes or so driving through the gut of the Shoe Cove river over and over:

I heard them tearing around the community as I made the return trip, but for the most part they were far enough away that I was in relative peace and quiet for the majority of the return trip.

Spectacular hiking! I suspect that there’s still snow on some of the Southern Shore legs of the ECT, but if Stiles Cove is any indication, the hiking season has officially begun on the ECT! Check out some of the pics below!

A bright beautiful day on the Trail.

No snow as the trail dips into the woods… so far so good.

The few spots that till had snow were packed down.

One of the gulches on the approach to Hollow Cove.

Ice and meltwater on the walls of Hollow Cove.

Loud cracks could be heard as the last of the ice melted away.

Still wondering what this thing is. Used to measure depth of snow perhaps? Walking by it yesterday, I started to think it might be a psychological experiment: to get people to take pictures of it and guess what it’s for.

Under the large, odd tree halfway to Shoe Cove, the last of the snow.

One of the gulches just before the trail dips into Shoe Cove.

I expected to see snow in the woods! Even the community path at the switch here looks clear.

The roaring river at Shoe Cove.

The water level is very high.

First view of Shoe Cove Island from the Grazing Grounds.

The only deadfall I saw in the first 5 km of the trail, and there just happened to be a bit of snow there as well.

Deadfall in the same spot, just past the Grazing Grounds.

I saw two medium-sized flocks of Eider Ducks, about 100 birds per flock.

The Eiders were just off Shoe Cove Island.

No snow on boardwalks over river crossings!

The view from avove Blackhead Cove.

At Sandy Cove (I think), some evidence of erosion with this line of land that has sunk. Take care as this is close to the edge of the trail.

The setting sun made the lighting spectacular for the return trip across the Grazing Grounds.

Heading back to Shoe Cove.

The steps down to Shoe Cove. Free from snow, a minor miracle! There are still a couple of wet spots so exercise caution.

Coming back around Hollow Cove, my shadow on the hillside.

At the point where private property owners have cleared down to the trail, additional clearing has taken place parallel to the trail. A sad sight IMHO.