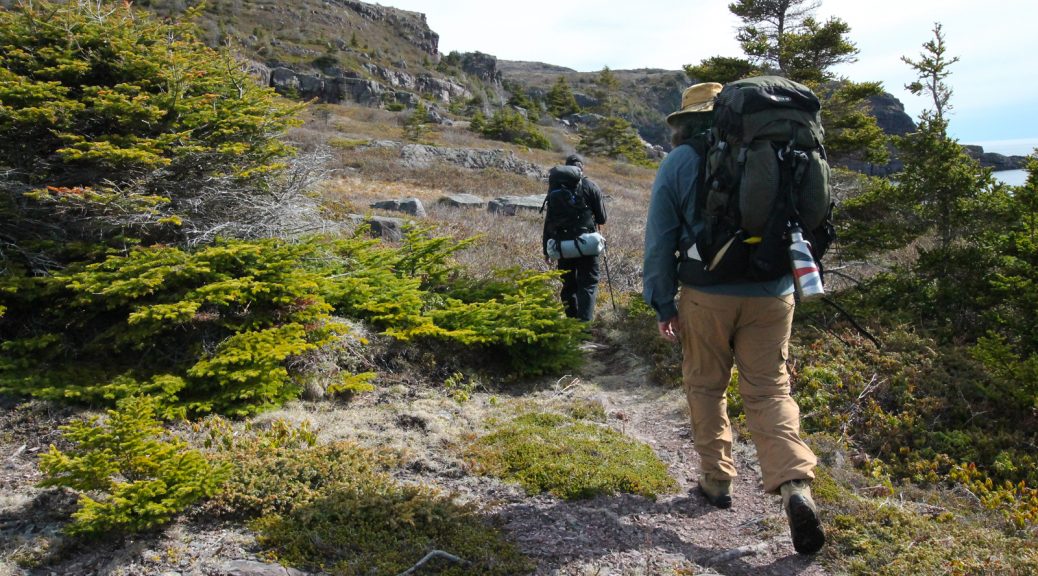 Hello folks! It’s the 24th of May and we likes to get away, especially when we have new toys to play with! I was planning an overnight getaway for the May 24th weekend, the weather looked spectacular, and so I thought it’d be fun to hike with a couple of buddies of mine with whom I’d chatted about hiking. Our schedules all aligned for a Friday evening/Saturday morning hike, and so we settled on the Motion Path, given that the Miner Point campsite is close enough to one end that we could leave late in the afternoon and still make camp with plenty of time to set up and get a bite. Our second day would be a bit longer, but we had all day, so there was no rush. A good plan!

The walk in over Shoal Bay Rd. is as advertised; rocky, wet, and not very scenic. That said, it was a quick hike, and we were on the trail in no time. Making our way past Nippers Cove, we saw a pair of otters playing by the shoreline! Well, playing is the best description I can give to their behavior, as I honestly have no idea what they were doing. The first was chasing gulls, and once he had rid the rocks of them, he dove into the water. The second rubbed his belly on the rocks for a couple of minutes, and then proceeded to stand on his front legs and jump with his hind legs a few inches off the ground. He repeated this five or six times, and then walked away, with his tail sticking straight out, following his buddy into the water. We didn’t know what to make of it. We felt lucky to have witnessed the creatures in their natural habitat, though!

As we approached Miner Point campsite, a flock of gannets began diving into the water to the north of it. It was spectacular. With the sun starting to set, we arrived at the campsite and quickly got started setting up, Andy and I hanging our hammocks around the edges of the tent site, Evan’s tent between them. It was an ideal spot. It was a very cold night, though, and I didn’t get much sleep despite being quite comfortable in my new hammock. Andy and Evan did a bit better than  me based on the snores I heard!

The next day we got off to a slow start: we had the day in front of us, and only 11.3 km to walk, so we took our time packing up. The sun was hot by the time we got on the trail. Heading south from Miner Point, the trail is challenging in spots, with some significant altitude gain, starting with the climb up the Tolt. The trail and the weather was beautiful, but by the time we got to Motion Head, I was fairly exhausted, having gotten little sleep, and my companions were starting to feel the heat and exertion as well. We all spent the last of our reserves climbing up to the top of Big Hill, and were quite happy to see our vehicle in Petty Harbour.  An exhausting but exhilarating hike!

As someone who typically hikes alone, it was a really great experience  having my buddies overnight with me on the trail. I had a great time and I think they did as well despite their first overnight on the ECT being a bit of a challenging one! Check out the pics of our adventure below!

We started in over Shoal Bay Road as the sky clouded over.

At the field just past the trailhead, a memorial had been placed since the last time I was here. I can understand why someone would want to be memorialized in such a beautiful place.

The twin falls at Raymond’s Gulch are very pretty. A stray buoy sat at the bottom of one of the cascades and made a sound like a drum as the water hit it.

A steep-sided gulch along the trail.

As we cooked our suppers, the sun set behind us, and the sky to the east turned an incredible shade of blue. I tried to capture it on camera but it didn’t quite happen. Notice the iceberg on the horizon.

My hammock was in a great spot!

Andy had a bit of a tighter squeeze for his hang, but he made do. Evan had a great spot for his tent.

We started up the Tolt the next day.

Lower Cove Pond in the distance as we descend from Burke’s Head.

Erratics are one of the main attractions on this trail, with these hoodoo-like rocks to the left on the approach to Motion Head.

A final look back towards Motion Head from above Siles Cove.

Earlier that same week I had a chilly, foggy jaunt on Tinkers Point Path. I was surprised by the fog… well, as much as a hiker from NL can be surprised by fog, but it kept me cool as I tried to make good time between Mobile and Tors Cove. The trail is in great condition and as always is one of the most spectacular when it comes to scenery, even in the fog. Check out some pics below!

A foggy day on the trail, with the view south from Cape Canine telling the tale!

The trail leading toward Tinkers Point.

A reroute of a section of trail due to erosion. This has been a problem for many parts of the ECT, but this was certainly a spot in need of remediation.

My perennial shot of Tinkers Point, shrouded in fog, the beautiful colors of the spring foliage.

Heather’s least favorite part of the Tinkers Point path. Mine is the south trailhead, just past this point, which some neighborhood dog seems to be using as a toilet.

Finally, a link to an interesting page. Somehow this came up in the statistics for my blog, as a visitor was somehow directed here from there. I was glad, at any rate, because I discovered this:

Amelie Hikes the East Coast Trail – a 2.5 year old who has taken up hiking!

Just too cute for words, and what a great way to introduce your child to nature! Check them out! 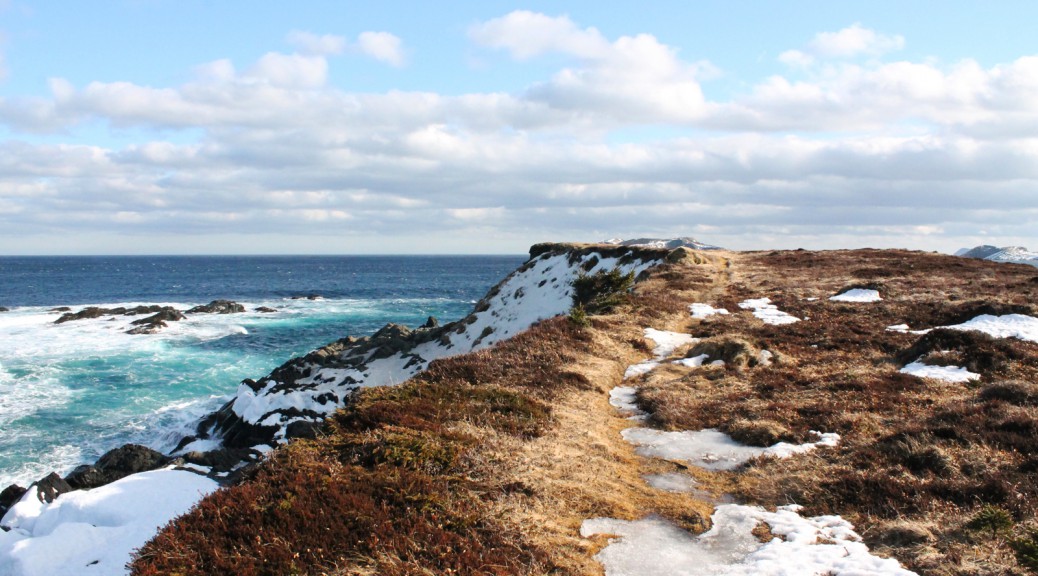 The first day of spring was two days ago, so that means the spring hiking season has begun! It’s still snowshoe season for the most part on the trails of Newfoundland, at least, especially in the woods. Given that it was going to be a bit breezy for Saturday’s hike, I decided to hike a section of the trail that had significant amounts of inland/wooded hiking, Tinkers Point Path. The trail was snow-covered and required snowshoes, but it was in such great shape that I’m sure it could mostly be negotiated in boots. At some point this winter a group of hikers traversed this path and beat down a spectacular track with their snowshoes; so good that for most of the Path it reminded me of the groomed snowmobile trails around St. Anthony on the Northern Peninsula!

The first section of the trail starts a little rough (I assume it gets a lot of use) but quickly settles into the “groomed trail” that covers 90% of the distance between Mobile and Tors Cove. The first bit, with the fence on one side and the coast on the other, has one spot that requires hikers take care; hug the fence and you’ll be fine. Exiting the woods for the first time, Marshy areas are starting to open up. The snowshoe trail in spots crosses areas that are becoming wet, so be careful. That said, sticking to it for the most part is safest: I deviated from it only a couple of times, and paid for it when I went through into a wet spot on the hike back.

Plenty of snow remains in the woods, but open areas such as Tinkers Point and Vales Meadow are pretty much free of snow aside from the established path where the snow was compacted. Speaking of Tinkers Point, the seas were very rough today, and crashed spectacularly against the rocks just off Tinkers Point. The section of the trail between Vales Meadow and the inland trek towards Tors Cove was very noisy with crashing waves. In a couple of places, a mini spout effect was created as water shot straight up against a barrier. Check out my pics!

I turned around at The Cribbies as per my agreement with Heather: I was not to snowshoe over the trail as it passes behind the fish plant in Tors Cove, a section with a precipitous drop. The Cribbies is close enough to the trailhead, I suppose!

I saw signs of wildlife, many gulls, a few small birds including juncos, and two bald eagles, one at either end of the Path. I got snowed on as a brief flurry passed over, but the weather was nice for most of the hike, with the sun coming out for the return trip. It was warm enough that I kept my jacket packed and my gloves off. I highly recommend this trail as a relatively easy spring snowshoeing adventure! Check out the pics below, and in the Tinkers Point Path page’s gallery!