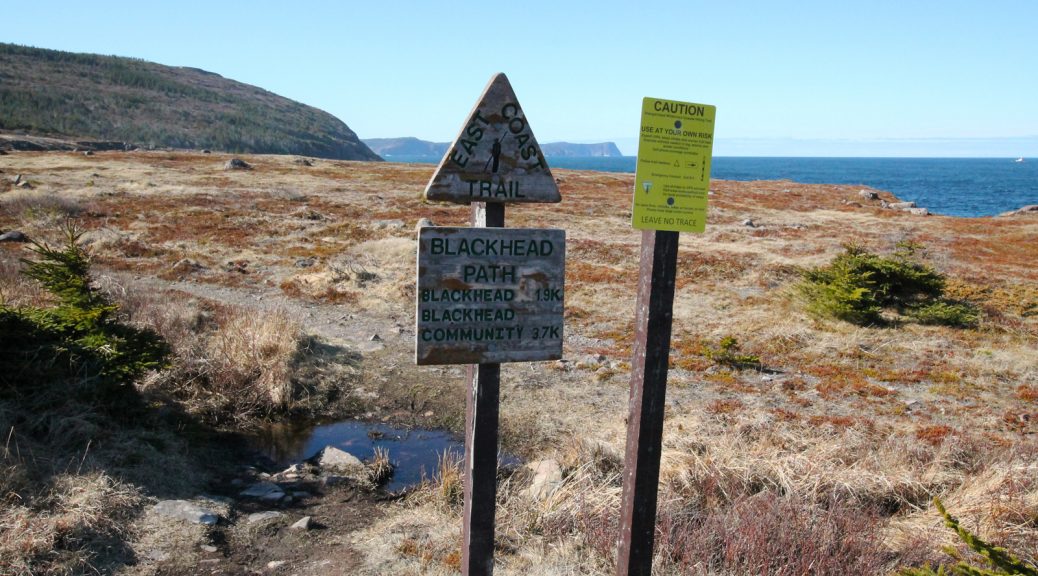 To get my knees back into hiking condition and get the exercise regimen started, I’m hiking some of the shorter trails on the ECT. Blackhead Path has always been a favorite of mine so it was yesterday’s target!

First off, there have been some changes to the north end of the trail. Folks who have hiked it in previous years will remember the north end of the trail as being along a private citizen’s driveway in the town of Blackhead. The trailhead has been moved to the cul-de-sac which was used up to now for hiker parking. This is not an ideal spot as the cul-de-sac has obviously been used for dumping for some time: there is garbage, broken glass, and dog feces to deal with at the trailhead. Doesn’t exactly give one that ECT feeling.

That said, this is understandable to a certain extent: the trail was winding around the edge of a private property and there were probably privacy issues. However, the change is a massive one, affecting perhaps the first half kilometer of the trail. I find it hard to believe that the property owners in question owned the stretch of property that is currently blocked. If this is a new development, how was this land ever put up for sale? We need to put a stop to the sale of coastal property in Newfoundland or there won’t be any left for the people of this province to enjoy. The use of this section of land is strongly discouraged, with fences and a rock wall. The owners went so far as to cover the former trail in boulders. They really don’t want people on their land.

At any rate, the new section of trail is nice and meanders through the woods for 500m or so before heading back to the coast to join the former trail.

The other point of interest is the condition of the trail. There is a fair bit of mud and water as the last of the snow from last week’s storm melts. There is patchy snow on the trail but only at specific points: the new woods trail section, climbing Blackhead, atop it, and on the back end near the top. Elsewhere the snow has pretty much melted. Either way it doesn’t present an obstacle: the mud and water is much more relevant.

An absolutely spectacular, if a bit chilly, day on the trail! Pics below!

The new trailhead. mind the glass and garbage.

There is still a bit of snow on the new woods section.

A tunnel of fences keeps hikers on the trail.

A rock wall blocks the former trail. My guess as to why this was done is that the fence is constructed to the actual edge of the property. I’m not interested in violating private property rights but I think this stretch of shoreline should never have been allowed to be sold.

The only “cliffy” section: it’s hard to capture the height on camera.

The view of Cape Spear from atop Blackhead.

Coming down the south side of Blackhead, some snow still on the trail.

Heavy seas in the gulches at trail’s end!

The trailhead, with Blackhead and the rest of the ECT extending beyond it!