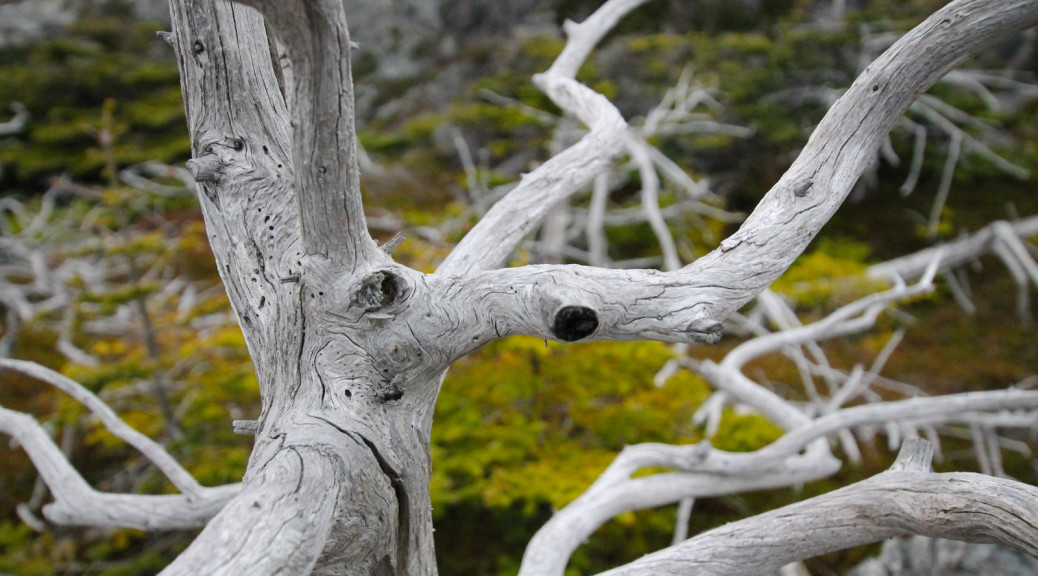 A couple of years ago I found out that the ECTA are in the process of building a new trail that starts from Cape St. Francis and would eventually make its way Bauline, and in the long term, points further south. There isn’t a heck of a lot of information out there about it, but between the hints dropped by the ECTA over the last couple of years and posts about the trail on another blog a couple of years back (thanks, Newfoundsander!) I felt confident that whatever condition the trail was in I’d be able to find my way out to Cripple Cove, at least. I was surprised to see a trail that’s nearing completion (with a few big jobs remaining, of course), complete with signage! The ECTA have outdone themselves with this path, folks! In an effort to describe the trail given that there are no official maps yet, this post is a bit wordy… feel free to skip right to the pics!

The first task was finding the trailhead. Having hiked the Biscan Cove Path to Cape St. Francis a number of times (this is my favorite leg!), I had looked but was previously unable to find it. Today though I had no trouble… the trailhead is marked with an official ECT trailhead sign! This was a good start. It can be found at the end of the road to the Cape St. Francis lighthouse, perhaps 25 m or so before you get to the fenced gate.

The tone for the trail is immediately set: up one side of a hill and down the other. The elevation changes on this trail are significant for this first leg, at least, with a big climb up around Big Cove (North). After climbing over some barren rocks, hikers climb back down to Back Cove, and then up the other side, where they encounter the first real obstacle due to the unimproved nature of the trail: the rope-assisted climbs and descents. I knew there were at least two of those and they’re very early in the trail. The first one is in woods and is almost unnecessary, but the second one is in a scary spot for folks who don’t like heights and might be worth skipping if you’re a nervous hiker.

Once we’re down off the hills surrounding Back Cove, the trail enters a fascinating section of dead trees on the west side of Back Cove. I know “tuckamore” is the name given to the bonsai-like trees that grow along the coast in Newfoundland, and these things were at one point that, but I’m pretty sure there’s another name in Newfoundland for areas of dead tuckamore like this and I can’t for the life of me remember it. Edit: the word I was looking for is starrigans! Anyhow, this section is pretty fascinating. From here, hikers round the coast and head up around Big Cove (North), first passing through a crevasse and then climbing steeply to a ridgeline from which views of Biscan Cove are available once again. The view of Big Cove from up here is spectacular.

After walking the ridgeline for a few minutes, hikers start the descent towards Cripple Cove. The intersection with the old trail is here: hikers can find the old trailhead on a nondescript turn on the Cape St. Francis road, hopefully my pictures help. If you’re looking to skip the rope bridges this is the way to go, but be warned, you’re also missing the dead tuckamore and the ridgeline walk which are really worth seeing.

From here, a little more up and down, as hikers pass through a rather large swath of forest regenerating from what looks like insect kill, before descending to Cripple Cove over some bald rocks. The trail continues past the Cripple Cove branch to Bauline. I’ll explore this ASAP!

Cripple Cove itself is accessible by a side trail and is the highlight of this section of the trail, at least. A beautiful little cove surrounded by cliffs, A walk out onto the hilltop known as the Barracks affords hikers spectacular views of Gull and Cripple Cove Rocks just off the coast, and Conception Bay on the other side, which the trail rounds and begins to follow. I was lucky enough to see two bald eagles as I climbed to the top of the headland, this far northwestern point on the trail.

Just a spectacular hike, folks, and highly recommended! I’ve taken a lot of pics so that folks can have a good idea of what to expect on this trail. Included in the pics are a description of the old trail and how to access it: on my return trip I walked out that way and then back in to finish the hike in order to document it as well. At any rate, here are the pics!

I parked at Biscan Cove. Had t snap one here. Love this place.

An official trailhead sign! Just before one gets to the gate of the Cape St. Francis lighthouse on the left.

The first view of Back Cove.

Some perspective on where the trail initially goes, markers firmly placed in the rocks.

The climb down to Back Cove.

The trail is well cut!

Back Cove. A bit of a hangout.

From Back Cove, the trail heads steeply uphill.

The view of Back Cove after the first climb.

The view of the west side of Back Cove from the second rope.

Looking back at Back Cove.

Looking at Big Cove (North) from the starrigans.

The trail heads into the woods for a bit.

The view from the bottom of the hill heading around Big Cove. I saw a whale from here!

Some interesting stuff in the crevasse!

Lots of steep sections appraoching the ridge over Big Cove.

The view from the ridge is spectacular.

The Biscan Cove Path on the other side of the ridge.

At the bottom of the other side, the well-marked intersection with the old trail.

The insect kill is visible as the trail heads down towards Cripple Cove.

One of the few places where hikers might get (very temporarily) turned around.

This crossing made for an interesting puzzle with logs placed randomly, some of which sink, some which don’t 🙂

The white rocks above Cripple Cove.

The branch to the Cripple Cove side trail.

The geology is fascinating down here. Some kind of conglomerate? I wish I knew more.

Looking east from the Barracks to Gull Rock.

North at Cripple Cove rock from the Barracks.

South along the coast of Conception Bay from the Barracks.

The still waters of Cripple Cove were crystal clear.

Lion Gulch on the back end of Cripple Cove.

The trail beyond Cripple Cove…

Heading back, some interesting erratics.

The start of the old trail from the branch at the bottom of the Big Cove ridgeline.

Signage along the old trail.

This nondescript turn is the location of this old trail.

It’s too bad the other, newer trail is so much better scenery-wise, because this woods trail is nice.

A closer look at the starrigans. Newfoundsander wondered on his blog what happened here… was this a natural death, a fire, insect kill? Hard to say. The blackened section on this small piece might be fire or it might be the signs of a disease.

Again, some interesting but difficult to interpret evidence.

The second rope-assisted climb looks much crazier when observed from down here.

The Cape St. Francis lighthouse from the trailhead.